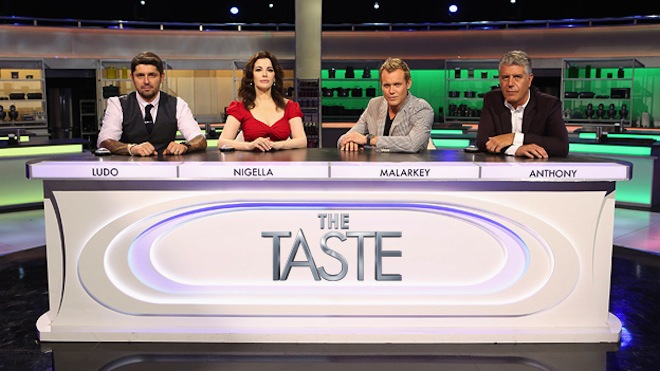 When I think of things the world needs more of, food television shows aren’t exactly at the top of my list. That said, I kinda like the premise of The Taste, premiering tonight on ABC.

Chefs Ludo Lefebvre and Brian Malarkey, along with food TV alumni Nigella Lawson and Anthony Bourdain, are put up on a massive American Idol style stage and given just one ceramic spoonful of a dish, though they have no idea who prepared it. It could come from a professional chef, but it could also be the brainchild of an amateur home cook. The four “mentors” (not judges) then critique the dish, offering up advice (and/or praise) to whoever may have prepared it, letting someone go at the end of each episode.

To be honest, I didn’t really care until Monsieur Bourdain laid it out a little more clearly during a media Q&A a few weeks back. “It really makes you think about these preconceived notions you have of food, and of people,” he explained. “We’d get a taste of this incredibly rich and heavy BBQ, and you’d just assume that it came from a big Southern guy. Or we’d get something very refined, very classic French technique, which you’d expect from a professional kitchen. But I can’t even start to tell you how often we were dead wrong when guessing who might be behind a certain dish.”

A two-hour premiere seems a bit over-the-top, which makes me scared that The Taste is going to be yet another spectacle versus an actual show of substance, but I’d love nothing more than to get my preconceived notions about food TV shows shattered. Fingers crossed that this is a good one.

The Taste, premieres tonight at 8 p.m. on ABC