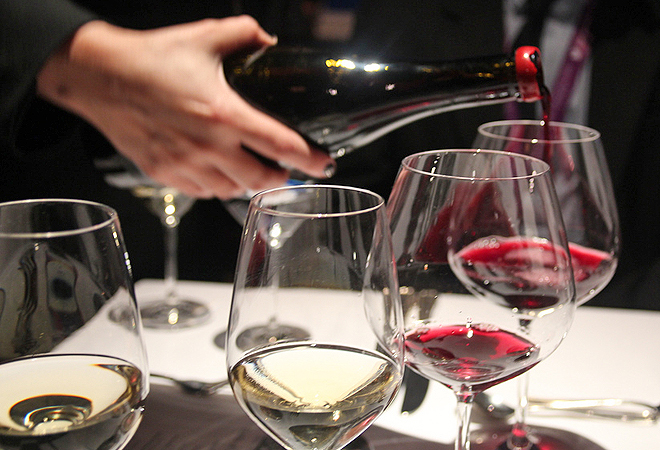 The wine world can be an intimidating place. So many rules! You hear them from your oenophile friends, the guy at the wine aisle in Trader Joe’s, and know-it-alls standing around a wine table at a party. And, without realizing why, you grow to accept that only cheap wines use screw caps or that if you want the best you have to spend lots. Fortunately at the 6th Annual Pebble Beach Food & Wine event last weekend, a panel of master sommeliers served to bust all such wine myths.

Moderator and Food & Wine Executive Wine Editor Ray Isle and master somms Larry O’Brien, Tim Gaiser and Shayn Bjornholm conducted a blind tasting of Chardonnays, Pinot Noirs, and Cabernet Sauvignons, sharing their guesses as to the origin, year, and price of each one. The audience had to vote on who they thought was correct, and in the end the bottles were revealed. Not only did this demonstrate that even the best of the best can mistake a $22 Pinot Noir* for the most expensive of the flight but that people won’t dump out a tasting of a $100 wine. Along the way, the somms answered questions from the audience and cleared up popular misconceptions about wine.

Myth #1: Aerators are the best way to decant your wine.

Busted: All three master sommeliers at the seminar agreed that the best way to aerate wine is by using a simple decanter. “It doesn’t have to be a specialized decanter either. As long as it’s clean, not soapy, and gives it some air, it’ll work,” said Shayne. Larry also pointed out that watching the wine evolve plays a part in your enjoyment of it. “I want to watch the wine go from unforthcoming and watch it evolve and change. That’s the joy of the wine, that’s a kind of discussion you’re having with the wine as it’s opening up as opposed to getting the wine in it’s fully evolved, ready-to-go state.” Don’t have a decanter handy? A wine glass will work just fine.

Myth #2: Red wines should not be chilled.

Busted: Red wines are best served a little lower than room temperature. “Red wines a little above room temperature are chewy and alcoholic, but it’s nice to have them a little cool,” said Larry. Stick a bottle of red in the fridge 15 to 30 minutes before serving, while white wines should be in the fridge for two hours before service and taken out 15 minutes before serving. But if you’re in a hurry, the fastest way to chill wine is by putting it in a bucket of ice water. That takes 25 minutes for whites compared to the two hours it takes to chill it in a fridge.

Busted: “You’re seeing more high-end wines both red and white with screw caps,” Ray said. The only difference between screw caps and corks, according to the master sommeliers is that since the former creates a more oxygen-starved environment it causes the wine to age slower. On the positive side, according to Ray, over the past 10 years the incidence of corkiness has dropped thanks to screwcaps. But word of caution, don’t ever age a plastic-corked wine longer than 10 years since some plastic corks tend to shrink.

Busted: “The extra buck or two that you spend to get some service in a store is huge,” Larry said. In this day and age of Googling, “nothing replaces the relationship you can have with a retailer, in terms of someone learning your palate,” said Tim. Good wine stores have folks who will take the time to speak with you and learn what you prefer. When you develop a relationship with a wine store owner or buyer, “they can take you through a tangential evolution and you’ll have the opportunity to try different things based on the fact that you can go back and say, ‘I really like that but turn the fruit up,’” said Larry. Then they’ll be able to point you to a wine you want to drink as well as something in your price range.

Myth #5: If you want a really great bottle of wine, you have to pay good money for it.

Busted: A wine’s pedigree—cost of the land, prestige, design and structure — determine its price. But value is a very elusive thing and price doesn’t necessarily mean it’s great or that you’ll like it better. According to Shayne an example of a great value wine is the German Riesling. “You can’t get a more distinct, beautiful food wine for $20 anywhere in the world. It just doesn’t exist. Mosel Kabinett specifically. That is a great secret that I hope never gets out of this room.”