Home Uncategorized Ready to Master Your Home Bar? Sam Ross Shows You How 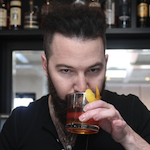 Ever wanted to create your own kickass cocktail program? And feel like you’re right up there with cocktail masters like L.A.’s Julian Cox (Rivera, Bestia) and Marcos Tello (1886, Invention)? New York bartender Sam Ross (Attaboy, Milk & Honey) is the man behind Comme Ça’s “classic cocktails with some tweaks” bar program which preceeded most of the new and novel creations from Cox, Tello, and others, giving them the tools and the know-how to invent some of your favorite drinks and bars around town.

So while Sam was in town this week, he gave a condensed version of the class he does with his new bartenders. Stick to these rules and you’ll be making your own modern classics in no time.

1. Every cocktail can be broken down into five or six cocktail families, much like French mother sauces. And memorizing the basic components of these can translate to hundreds of drinks. Since Sam’s bars usually don’t have cocktail menus, it’s easier for his bartenders to remember the basic components of these cocktails, like, “It’s a Gin Sour but with honey instead of sugar.” A Gin Sour can translate into a Tom Collins drink (long on ice with some club soda) or the 2 ounces of gin can be replaced with any other spirit for a different drink.

2. Less is more. “If you’re using good booze, fresh citrus and good modifiers, you don’t need to start doing six, seven, or eight ingredients in a drink. I’m sure you can make a drink that tastes good with that many ingredients. But then you’re not trying hard enough because you can do that with three or four ingredients.” With eight-plus ingredients, the drink will start to be muddied, “not all those things are going to be pronounced.”

3. Say ‘yes’ to egg whites. People are normally squeamish about using this ingredient but it gives a cocktail a “beautiful, silky-smooth consistency and it’s a binding agent that takes the edge off the acid and brings everything into alignment a little better.” A traditional sour contains egg white. Nontraditional is without. So a “nontraditional sour with honey” would be a Bee’s Knees cocktail.

4. Dilution is a very important but often overlooked aspect of your drink. After shaking or stirring you’re adding roughly 30 to 35 percent water into your drink. “We never build drinks over ice. We put ice right at the end. Same with adding ingredients to a shaker or mixing glass. As soon as you add ice, you’re starting that dilution process and you’re not in control of it anymore. You can always add water to a drink, you can never take it out.”

5. The 007 factor, or on the subject of stirred vs. shaken. If you can see through the mixture of ingredients (basically spirit on spirit like Manhattans and Martinis), stir the cocktail. Drinks like these should be “big and heavy and envelop the tongue, while something like a daiquiri you’re not only chilling and diluting it but you’re aerating it.” That foamy head of ice crystals and air bubbles plays is the “cocktail smiling at you” and it plays on your tongue. But you don’t want that on your Manhattan, which is supposed to be a heavy sipper. Only shake when you’re using modifiers like egg whites, cream or citrus juices.

6. Japanese hard shake? Not so much. This Japanese shaking technique hits three points in the all-in-one shaker and is claimed to get a drink colder but with less dilution. “For me, shaking with one big piece of ice and just going good, old-fashioned American brawn gets it just as cold.” Sam said that he’s never gone so far as to test the differences in temperatures yielded by the two styles but they’re pretty much similar and it’s never blown him away enough to get him to perfect that Japanese shake.

7. Don’t make things harder than they need to be. “A lot of this new molecular mixology stuff kind of irritates me but some of it’s proven worthwhile,” said Sam. “I like the use of liquid nitrogen. I think it’s a really effective technique, especially visually it’s so appealing when they chill a coupe with liquid nitrogen on the bar top. But clarifying citrus and these sorts of things? Man, it’s cool to see a daiquiri that’s perfectly clear but it still tastes exactly the same. So that is a little bit of a waste of time.”

9. An Old Fashioned should be served up “hot,” meaning understirred and the first sip will be very strong. The cocktail is a sipper that takes time to enjoy and needs to mellow. Don’t stir it with ice in a mixing glass and then strain it over ice into a glass: “When you first get it, it’s going to be great but then you won’t have enough time to enjoy it at its optimum dilution rate.”

10. Let the drink attack your nostrils. Think bitters in an Old Fashioned, cinnamon on a Pisco Sour or a misting of Islay over Sam’s Penicillin cocktail. “80 percent of the palate comes from the nose and that’s basically the aromatic sitting on top of the rock.” That’s why in an Old Fashioned Sam likes to express the oils (squeeze the peel) over the drink, “I really like the brightness. The burning of the oils is a cool trick, it caramelizes that oil. But the citrus peels on top of the Old Fashioned is meant to be a contrast between the heaviness that is the whiskey. You want a contradiction to the rest of the drink as the first note you smell.”

Bonus:
Here’s Sam’s cocktail recipe for a new drink that he likes to enjoy with a burger. It’s perfect for summer.
Midnight Stinger
by Sam Ross of Comme Ça/Hinoki & The Bird
●    ¾ oz lemon
●    ¾ oz simple syrup
●    1 oz bourbon
●    1 oz Fernet Branca
Add the ingredients to a mixer. Pour over a glass filled with crushed ice. Garnish with a mint sprig.