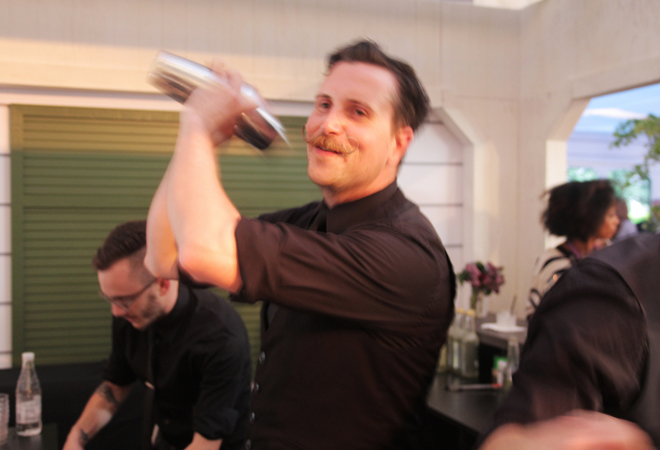 Pebble Beach Food & Wine is one of several schmancy epicurean events sponsored by Food & Wine magazine and put on by Coastal Luxury Management. Each year, they bring together celebrity chefs as well as acclaimed wineries from around the country. For four days, wine seminars, cooking demos, dinners, grand tastings and parties are held in the tony Pebble Beach enclave of resorts, equestrian centers and golf courses overlooking the gorgeous Monterey Bay.

Needless to say, I felt like young Charlie Bucket when I was invited to attend. And even though this was my first time at PBFW and I had the discipline of a kid in a chocolate factory, I was still able to learn a few things about drinking. 10, in fact.

1) Ice cubes in white wine is adorable. When Mario Batali did it it was gourmet, but when Drew Barrymore did it to cool down in the sweltering tent during the grand tasting? Adorbs. The actress/winemaker unapologetically dropped ice in her wine glass of Barrymore Pinot Grigio to get her through interviews promoting her new Barrymore Wine at Saturday’s event.

2) Drink wine you can pronounce. Since the grand tastings and opening reception are basically wall to wall wine, I sought out PBFW regular Dan “The Imbiber” Dunn, host of SiriusXM’s “Dan Dunn’s Happy Hour,” for advice on how to not get overwhelmed. “I look for two things when choosing which tables to visit at large wine events: 1) I can pronounce the wine and 2) the person pouring it is either very hot or very friendly. If both, I’ll make multiple visits.”

4) Not all vodkas taste the same. Being primarily a whiskey-gin-rum-tequila drinker, I never bothered to figure out whether this vodka claim was true until cocktail pioneer and author Tony Abou-Ganim lead the “Cocktail Revolution: Caviar & Vodka” panel where he paired rye, potato, wheat vodkas with six different California Caviar Co. caviars. By the way, as Belvedere rye vodka is such a spice bomb, Tony says it’s perfect for Bloody Marys.

5) Potato vodka and Siberian caviar are divine together. “If I had to pick one vodka to go with caviar I would go with potato,” said Abou-Ganim at his panel. “The creaminess of the potato with that rich, oily mouthfeel, the earthiness, the lack of the grain notes really complemented the briny, salty and the nuttiness of the Siberian caviar.” Drool!

6) 10 a.m. is too early to drink wine. At least for me. Found this out at the 10 a.m. seminar featuring a blind tasting with master sommeliers. When faced with three glasses of Chardonnay, three of Pinot Noir and three of Cabernet Sauvignon, all I could manage were baby sips of each. Looking back, I’m now trying not to kick myself for dumping out the taste of $100 Cabernet.

7) Champagne is the fixer of sugary cocktails. At the Cosmopolitan of Las Vegas-sponsored happy hour, the featured cocktail, “Little White Lie” (rhubarb-strawberry rose syrup, lemon juice, vodka, Lillet Rose and raspberry lemon mate tea) proved a bit too sweet for my taste. But, taking my cue from champagne cocktails like the Mimosa and “Death in the Afternoon,” that was easily remedied with a big hit of champagne.

8) Cocktail paired dinners have tasting-size portions for a reason. In the past when I’ve attended cocktail dinners, I couldn’t help but grouse whenever the drinks arrived in small glasses. But at the “Raising the Bar: Mixology Lunch” where bartenders Michael Lay and Mariena Mercer (The Cosmopolitan of Las Vegas) paired full-size drinks with all five courses — by Levi Mezick (Restaurant 1833), Abram Bisssell (The NoMad), David LeFevre (M.B. Post) and Hedy Goldsmith (Michael’s Genuine Food & Drink) — I was put in my place…where I didn’t budge for one, maybe two hours.

9) Wine makes me thirsty. At the grand tastings in the hot tent, wine was the last thing I wanted to drink. It coats my tongue and, when combined with heat, makes me sleepy. Fortunately, Seven Grand’s refreshing Mint Juleps, Moscow Mules and Gold Rushes as well as Goose Island’s Matilda Belgian-style Pale Ale quenched my thirst right quick.

10) Public transportation drives me to drink more. Since PBFW was pretty much contained in Pebble Beach, the event organizers were able to supply a constant stream of shuttles, tour buses and chauffeured cars to move guests between events. Needless to say, this made it all too easy to exceed my standard two-drink-per-night maximum. Designated drivers FTW!