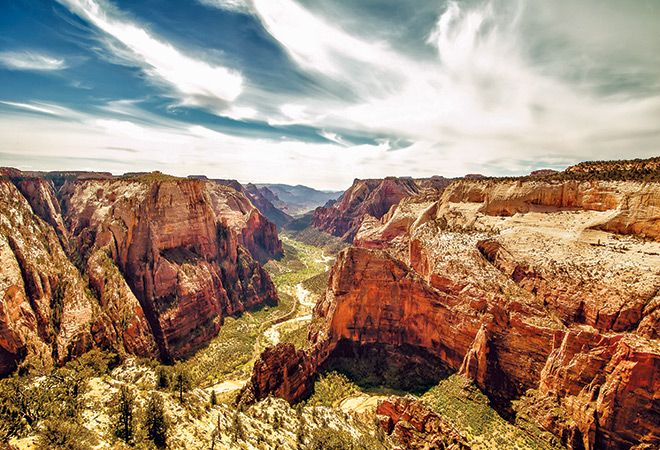 We almost skipped it. Four miles off the blazingly dull road to Vegas, the ghost town of Calico isn’t much. Restored years ago to dry-rotted authenticity by Knott’s Berry Farm, the place had as many as 1,200 inhabitants in 1887, when there was still silver to mine in the pale hillsides. The busted boomtown would linger on, mining the tourists—busloads of Chinese gamblers, girthy Americans, and desert-loving Germans—traveling to the modern-day boomtown of Vegas. Or in the case of my wife and two tween daughters, to Zion National Park by way of Boulder City.

Boulder City, once Nevada’s most populous town, made Vegas possible. It was where the government set up camp in 1931 for workers plugging the Colorado River with the Hoover Dam. In those days it was called the Boulder Dam, and the Boulder Dam Hotel, our base, was built to accommodate the people who began flooding in to observe the 500-foot concrete wall inch up the deep V of Black Canyon. The white colonial-style building is a be-columned blip of modest stateliness among the simple storefronts of the township’s historical core. Boris Karloff and Shirley Temple stayed here, as the brochure will tell you, and while the rooms are tight, they’re clean and functional and a short walk to Milo’s Cellar, a wine bar that serves decent sandwiches.

The hotel also has a small museum devoted to the dam, eight miles away. But this is one of those cases where you have to see this feat of civil engineering—to feel your stomach lurch as you look down the interminable arc of the dam—to appreciate it. On the other side lies Lake Mead, a 120-foot-high band of white cliff revealing how much the reservoir has receded since it was created in 1935 to hydrate a burgeoning Southwest.

Water has, of course, been shaping the region forever. From Hoover Dam we glide over vast abyssal plains formed by a vanished ocean, knolls breaching the surface like the backs of whales, then drift through the pink-and-red Virgin River Gorge on the route to Zion National Park. Rust-colored cliffs jut hundreds of feet above the hotel rooms and historic cabins (redone in 2010) at Zion Lodge, which stands on a canyon floor among cottonwood, elder, and ash.

From the rocking chairs on our room’s porch we can see the footbridge that leads over the Virgin River to the Emerald Falls trailhead. “This is so beautiful,” says Corey, our 12-year-old, as we teeter up the stone staircase, past waterfalls, to a Navajo sandstone grotto. (I nearly fell off the trail when I realized she was talking about the view and not something on an iPad.) The moderate two-hour hike is about as spectacular as one could hope for. Then again, all of the hikes are. The lodge’s Red Rock Grill can pack you lunch, or, for variety, you can hit the town of Springdale, just outside the park. That’s where we fill up on crepes and nuevo smoked-pork tacos at MeMe’s Café one day and, on another, Southwestern dishes like chicken relleno and sweet potato tamales at the Bit and Spur.

With the dirt from a final morning hike still on our soles, we depart the sandstone holy land, punching Vegas into our GPS. For the first time in years, cranes are on the horizon there again, with new hotels (including an SLS) and entertainment complexes on the rise. A giant new observation wheel stands sky-high, but we’re angling for downtown, which is undergoing a revival of its own. A couple of blocks from the carnivalesque Fremont Street Experience, we stop in for tasty reinterpretations of Bangkok classics at Le Thai, where the back patio dwarfs the hip little dining room. Five minutes farther up, the Downtown Container Park teems with families encircled by steel boxes that have been converted into shops and restaurants.

Kids are barred from the park after 9 p.m., which is fine, since we are destined for Red Rock Casino Resort & Spa, a half hour northwest in Summerlin, for one last wallow in nature. An elegant, curving rectangle plunked down onto what looks like a shopping center, it’s where locals staycation. With sushi in our bellies from Hachi, we topple pins at the hotel’s handsome bowling alley before camping out 17 floors up in a spacious room with chunky mod lines and a cavernous marble bathroom. Then in the bleary light of morning we set course for Red Rock Canyon nearby. You could spend days here, pretending you’re on Mars or hunting for petroglyphs left by long-gone Native Americans drawn to the area’s springs and water holes. It’s dramatic by any standards, but all the more so when you spy Vegas in the distance, another point on the Southwest’s vast time line of boom and bust, water and dust.