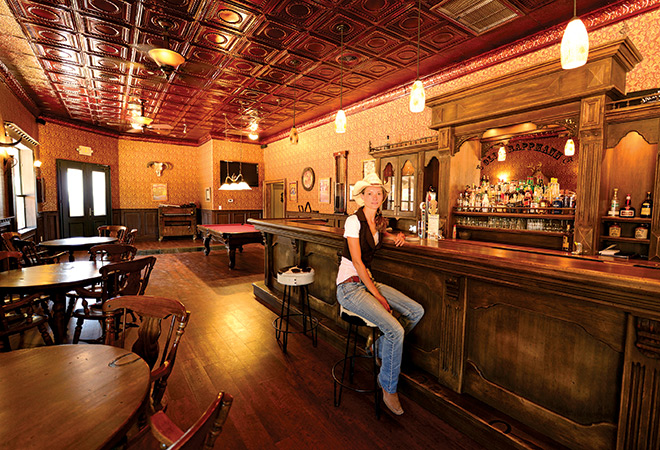 After hundreds of miles of desert, first the vast expanses beyond the Coachella Valley and then endless stands of saguaro after crossing the Colorado River, I have absolutely no desire to ever leave Tucson’s Arizona Inn.

You can get used to the refined setting of the 1930s-vintage inn: the coral-colored walls and unapologetically green lawns. Blue doors and blue corn pancakes, prickly pear syrup on the side. A ping-pong table beneath a palapa and a palpable indifference to all things hip. Because even in this tweeting, twerking world, at the Arizona Inn some things just don’t change.

Driving east from Tucson, with El Paso the next major city along Interstate 10, I go in search of other Arizona originals, the enduring survivors of earlier times. Outside Benson on a dirt ranch road, a big brown-and-white dog runs alongside me almost to a sign that spells out an unlikely message in metal block letters: Headquarters For Books About The Southwest. Past two braying donkeys, I reach Singing Wind Bookshop, located in the front rooms of owner Win Bundy’s house.

Bundy studied under famed essayist and UCLA chief librarian Lawrence Clark Powell during his years at the University of Arizona. Going against Powell’s advice, Bundy opened the bookshop on her cattle ranch. Forty years later it’s still here. Bundy is off the ranch today, so store manager Kathy Suagee conducts the requisite tour of the hand-built mesquite bookcases, where categories are precise enough that Jewish pioneer history earns its own shelf.

Thirty miles south is Tombstone, “the town too tough to die” if not too proud to exploit a long-ago gunfight between clans of feuding white guys. In this Second Amendment Disneyland, guns don’t kill people, but they do help sell caps emblazoned with such slogans as “God, Guns & Guts Made America: Let’s Keep All Three.”

Liberties clearly safeguarded, I continue south, winding through the Mule Mountains into Bisbee. The mining town prospered in the early 1900s, and rather than Old West false fronts, there’s a big-city solidity to its buildings, many with ornamental details and faded painted advertisements.

I’m staying at the Letson Loft Hotel, which like Bisbee itself, embraces history without becoming a museum piece. Floors slope, and the doily-free rooms are unfussy, some with exposed sections of brick and antique pressed-tin ceiling panels for decoration.

Across Main Street in a 1907 building, I dine along the mezzanine rail at Cafe Roka—Bisbee’s destination restaurant since 1993—with a Sazerac for a warm-up. By dawn snow frosts the slopes above the deserted streets, as I detour through alleys and climb Bisbee’s extensive stairway network.

Beyond Bisbee I drive along the Huachuca Mountains and through high-country ranchlands, catching glimpses of the rusted border fence rambling over Nogales’ hillsides, before reaching Tubac. Despite an oversize sign better suited to an outlet mall, the town dates to 1752. Away from the highway Tubac is reminiscent of New Mexico, with dusty streets of galleries and adobes, including the Poston House Inn, a B&B where rooms are simply and tastefully adorned with Southwest art in an 1855 building.

Outside Elvira’s Restaurant a wiry guy emerges from a lipstick-red Chevy pickup displaying Sonora plates. Going in, I’m encouraged by traditional white-straw cowboy hats beneath a galaxy of teardrop glass orbs suspended from the ceiling in the surprisingly contemporary interior. Elvira’s opened in 1927 but moved from Nogales, Mexico, in 2009 after the border situation deteriorated. There’s nary a combination plate but several stuffed chiles, moles, and molcajetes, although I can’t pass up a cabrilla fillet prepared with salsa verde. The restaurant is suddenly abuzz; stifling his excitement, the server says, “It looks like we have a celebrity with us,” then points to the guy I saw earlier: boxer Jorge “El Travieso” Arce, the four-time world champion and a Mexican national hero.

Border fence notwithstanding, the age-old connection between Arizona and Sonora remains strong. Interstate 19 travels north through mesquite flats, and outside Tucson on the Tohono O’odham Reservation, Mission San Xavier del Bac’s white towers rise against a cerulean sky. The ornate door hardware incorporates figures of mice and rattlesnakes, while locals pray before a fantasia of saints and angels set among frescoes trimmed with gold leaf—an 18th-century Spanish vision of paradise in 21st-century America.