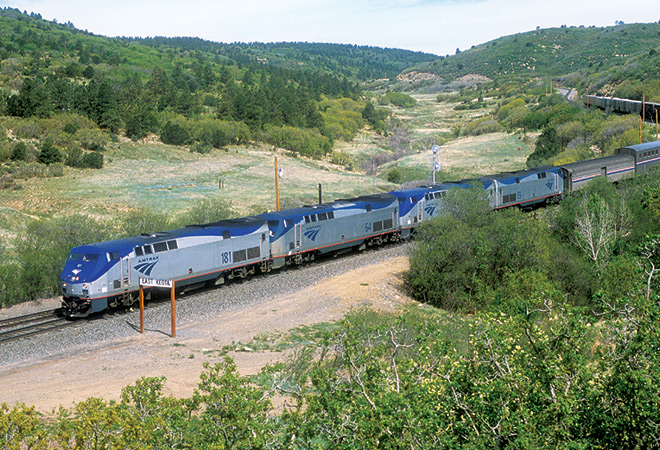 Ever since I could drive, I’ve traversed the state—and crossed its borders—behind the wheel of a car with the fervor of a Mary Kay saleswoman. Airplanes reduce America to crop circles and cloudy skies. But my favorite way to take in the country is on the rails, which provide window seats to all the wonder without the stress of missing a turn or driving in a rainstorm. You can walk around. You can sleep. You can imbibe!

For first-timers I recommend Amtrak’s 991-mile route from L.A. to Santa Fe. No sooner does the Southwest Chief pull out of downtown’s Union Station (departure time: 6:15 p.m. daily) than it’s time for supper in the dining car (limp salad aside, it’s not bad). By morning I’ve crossed the Colorado River; by lunch I’ve absorbed hours’ worth of red buttes and purple sky. Around 1:30 p.m. the train rolls into the sleepy station in Lamy, a less-than-30-minute shuttle ride from Santa Fe. The Inn of the Turquoise Bear’s historic adobe is a charming base camp (past guests have included Ansel Adams and Igor Stravinsky). Browse the turquoise rings sold by Native American vendors beneath the porticos of the Palace of the Governors before ordering a plate of the state’s famed blue corn enchiladas for dinner (Maria’s New Mexican Kitchen and Tomasita’s do them justice).

The next day I usually rent a car and slice up the high road to Taos. Rosaries and crutches from grateful pilgrims decorate the “holy dirt” room of the adobe church El Santuario de Chimayo. The Rancho de Chimayo restaurant’s sopapillas with honey have their own miraculous qualities. The road wraps around other historical churches and towns heavy on weaving and pottery studios before depositing me in Taos. You can drop in on the Mabel Dodge Luhan House, once the getaway for New York bohemians and D.H. Lawrence, or take a guided tour of Taos Pueblo, three miles out of town, before returning to Santa Fe. On the train ride home, contemplating the vistas with a glass of pinot grigio in hand, you may become a rail convert yet.