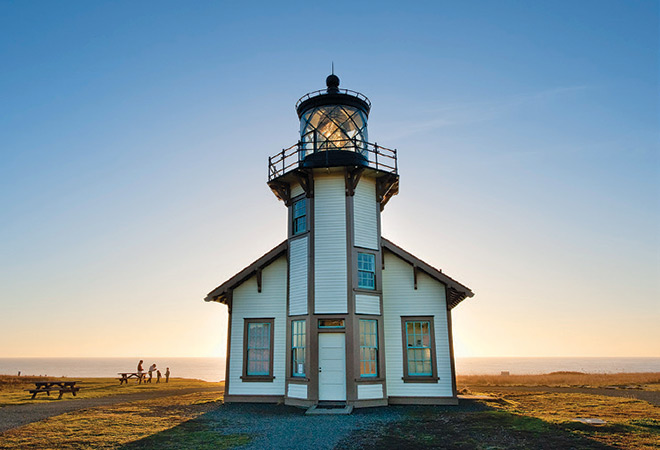 The drive to Mendocino isn’t exactly short, but it’s one I’ve come to love since my father bought a vacation home there 13 years ago. After passing through the Sonoma Valley, I always stop at the World Famous Hamburger Ranch & Bar-Be-Cue along the 128 in Cloverdale. From there the road winds past rolling vineyards (including Maple Creek and Goldeneye) and farmhouses with grazing sheep, then into the Anderson Valley. Along the way I might browse the kitchen tools at Farmhouse Mercantile in Boonville. The hamlet has its own folk language—a mix of Scottish, Gaelic, Irish, and Spanish—known as “Boontling.” But all you really need to know is that “bahl hornin’ ” means “good drinking,” best said while holding an ale from the Anderson Valley Brewing Company.

Soon after Husch Vineyards flits past, I’m cruising through 11 gorgeous miles of Navarro River Redwoods State Park. The town of Mendocino isn’t far off. Charming clapboard inns, cottages, and B&Bs (the Packard House is an easy choice) line the road above a jagged coastline. Picturesque and small (the population is less than 900), the place was the setting for the fictional Cabot Cove, Maine, in the old TV series Murder, She Wrote. Not that Angela Lansbury was buying tea lattes at Moody’s Organic Coffee Bar. Next door you can get a blackened rockfish sandwich on the deck at Mendocino Café. For dinner it’s Cal-French at Café Beaujolais, located in a cute yellow house surrounded by lush grounds. The next day I might hike to the waterfall in Russian Gulch State Park or walk the headlands to the Point Cabrillo Light Station. If there’s still time, there’s always the Skunk Train, which chugs through miles of redwood in nearby Fort Bragg.