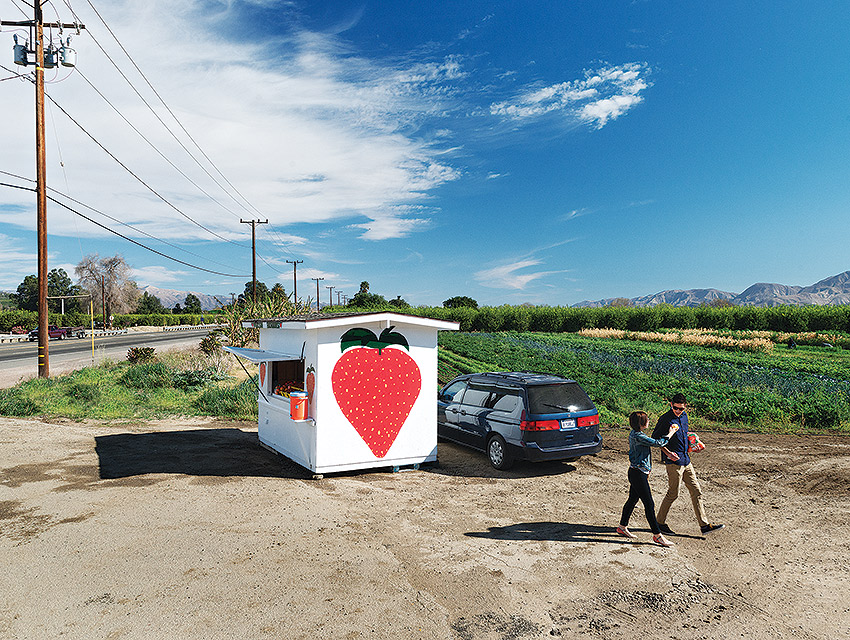 Whenever I think on the agricultural wonderland that was Southern California—vegetable farms hugging the coast from Malibu to San Pedro, citrus orchards cloaking the flats of the San Fernando Valley—I want to jump back in time, Jules Verne style. Instead I make a pilgrimage to Highway 126, the rural roadway that cuts through Ventura County’s verdant Santa Clara River Valley. Since their arrival in the mid-1800s, farmers, awestruck at the rich alluvial soil and exquisite climate, have transformed this place. By the 1920s, one local enterprise, Limoneira, proclaimed itself the world’s largest lemon ranch. That multigenerational operation is one of several that have survived the march of time.

I could take the 101 and hang a right in Ventura; however, for the full effect, I ride the 5 to where the 126 begins just past Six Flags. Tract houses give way to row upon row of lemon and orange and avocado trees, their hypnotic spell broken by the occasional line of eucalyptus. The valley is embraced by the dramatic Los Padres wilderness to the north and by South Mountain, more of a slumbering bear, to the south. Soon I’m in the trapped-in-amber town of Fillmore. Yes, that Queen Anne-style schoolhouse, built in 1896, is still a functioning school. At the ocher train depot, antique steam engines belonging to the Fillmore & Western Railway Company depart for tours of the valley, but I keep rolling west into the suburban sprawl around Santa Paula.

Following the signs to the historic district, I arrive at a barn-red clapboard train station that dates to 1887, when Southern Pacific completed the line that once ferried tons of citrus and avocados, lima beans and sugar beets, out of the valley. The Agriculture Museum across the tracks is a revelation, from the novelistic family histories to the jewel-like tractors. A stroll one block east to 10th Street brings me to the Santa Paula Art Museum, whose exhibits celebrate the area’s heritage.

After a brief detour in downtown Ventura, I make for the harbor and Brophy Bros. Restaurant and Clam Bar. The fish-and-chips don’t disappoint as I gaze at the comings and goings of the small fishing fleet. Then it’s on to my final destination, Los Olivos, a tiny village in the Santa Ynez Valley. I’m at the Highway 154 turnoff in Santa Barbara within an hour of leaving Ventura. A twisting, rock-walled road, the 154 swoops like a roller coaster into Santa Ynez. The golden hills are dotted with majestic oaks or swathed in undulating grapevines. At the point that 2004’s Sideways introduced a nation to the fickleness of pinot noir, vineyards had already eclipsed cattle and horse ranching as the valley’s primary preoccupation. Somehow Los Olivos—four streets that converge at a flagpole in the center of town—has retained its small-town feel while boasting enough tasting rooms, top-notch restaurants, and elegant shops to while away an entire day.

I spend the night at the Ballard Inn, a faux Victorian with a deep porch and themed rooms (mine’s the Equestrian). For dinner I have a reservation at Sides Hardware and Shoes, where the talented Nichols brothers—among the early farm-to-table practitioners when they ran the storied Brothers at Mattei’s Tavern—incorporate their house-made bacon in such dishes as the scallops with braised leeks and pomegranate seeds.

After breakfast the next morning at the Ballard (complimentary, no less), I walk around Los Olivos, stopping to browse leather goods from Italy, home accessories from France, and paintings by local artists. I sample an extraordinary syrah in the cozy Stolpman cottage, sip a singular grenache in the sleek boutique space for Kaena, and lounge in the garden at Longoria, probably the valley’s most respected winemaker. There’s no better soak-it-up lunch than the tri-tip sandwich at Los Olivos Grocery along the 154.

Homeward bound I admire the silvery feathering of the olive groves that have sprung up in the last decade and make a mental note to go olive oil tasting on my next trip. As I crest the pass, any more thoughts are vanquished by the sunlight bouncing off the ocean, the Channel Islands in the distance bearing halos of gold.