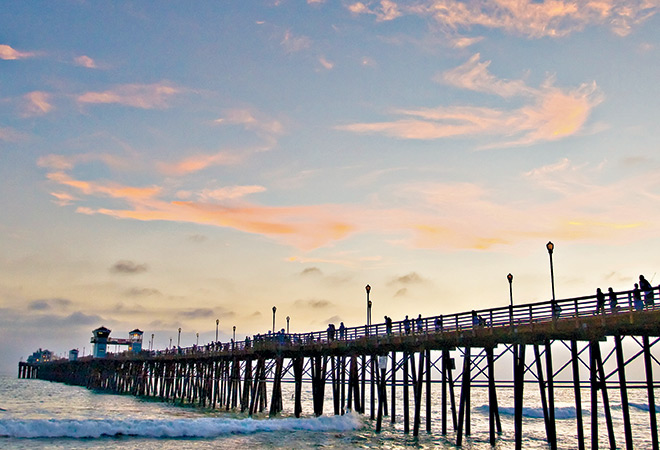 The trail in Anza-Borrego Desert State Park leads through a streambed choked with huge boulders and trunks of California fan palms washed down by flash floods. The canyon closes in before reaching a cluster of palms draped in thick frond skirts, a genuine desert oasis that on this chilly afternoon offers escape not from sun but wind.

Just a few hours ago and barely 100 miles away, my wife, Becky, and I were roaming the coastal bluffs of Torrey Pines State Natural Reserve and weaving through groves of the reserve’s namesake trees, the rarest pines in North America. When we set out to explore San Diego County, we agreed to forsake the tried-and-true—there would be no Gaslamp District or Shamu on this excursion. In fact, just past the white domes of San Onofre, as troop carriers and helicopters kick up dust at Camp Pendleton, we begin the trip by hopping off I-5 for Old Highway 101. Until it was usurped by the 5, the 101 served as San Diego County’s primary north-south coastal road. Now it’s a kind of Route 66-by-the-sea, connecting a string of beach towns that stretch for 30 miles from Oceanside to La Jolla.

Bound for Oceanside’s nearly 2,000-foot-long wood pier, we walk past a barbershop where deer heads stare out from above the chairs and signs advertise military fades for the marines of Pendleton. Oceanside reveres its surfers, too. Housed in an impressive contemporary building with a wavelike roofline, the town’s California Surf Museum includes a holy relic: a 67-pound redwood monster thought to have been shaped in 1923 by Hawaiian legend Duke Kahanamoku.

Outside Oceanside, Old 101 crosses coastal wetlands, then cruises along Carlsbad’s beaches. The towns come in rapid succession, and the highway soon reaches Leucadia, home to mom-and-pop surf shops, vinyl finds at Lou’s Records, and Mexican soups at La Especial Norte. The decor ranges from plastic marlins and red parrots on swings to a sepia-tone photo of a Mexican Revolution firing squad. Actor Pedro Infante gazes into our booth from a publicity shot as the fragrance of cilantro rises from the traditional chicken soup—thick with avocado chunks and generous pieces of white meat.

Postlunch progress is slow, and it’s dark as we roll into the Lodge at Torrey Pines’ clinker-brick porte cochere, manned by a kilt-clad doorman. The Lodge was inspired by the Gamble and Blacker houses, and our room’s Craftsman details make this as close as we’ll ever come to spending a night in a Greene and Greene. Located on high ocean bluffs, the Lodge is in La Jolla but about ten minutes north of the posh village. We dine at the Hake, an ambitious new seafood restaurant that serves dishes like hamachi tiradito and striped bass tart with lemon and capers. Set below street level, the room subtly evokes a classic fish house—dark wood floors, subway tile, and unfinished support posts that resemble pier pilings.

The next day we leave the coast for the desert on Interstate 8, which quickly transitions from suburb to rocky foothills before we stop at Alpine Beer Company. An outlier on San Diego’s booming craft beer scene, it’s a couple of doors down from a roadhouse-like brewpub, where Becky and I share the bar with hipster hopheads, plus a few aspiring sons of anarchy, as we dig into spicy pulled-pork sandwiches and taste IPAs.

Despite its name, Alpine is only at about 1,800 feet, and the climb into the mountains begins in earnest on Highway 79. Ash gray trees, burned in 2003’s Cedar Fire, look like snow on high peaks in Cuyamaca Rancho State Park. The temperature soon plunges into the mid-30s, so at Julian, the gold mining town now best known for its mother lode of apple pies, we take a plunge of our own, dropping 4,000 feet and twisting from pine forests to ocotillo and cholla in Anza-Borrego. It’s desert for people who love the desert: big, horizontal, and uncluttered.

After the canyon hike, we orbit Borrego Springs’ huge roundabout, stopping at the self-serve Kiwanis grapefruit stand before warming up beside the wood-burning fireplace in our Southwest-style room at La Casa del Zorro, Anza-Borrego’s newly reopened historic resort. By morning storm clouds break like a wave over the Cuyamacas. Veils of rain drift over Culp Valley’s rocky expanses of agaves and yuccas, creating a rainbow that arches across the desert—a sight as unexpected as the forecast for snow on a drive through San Diego County.