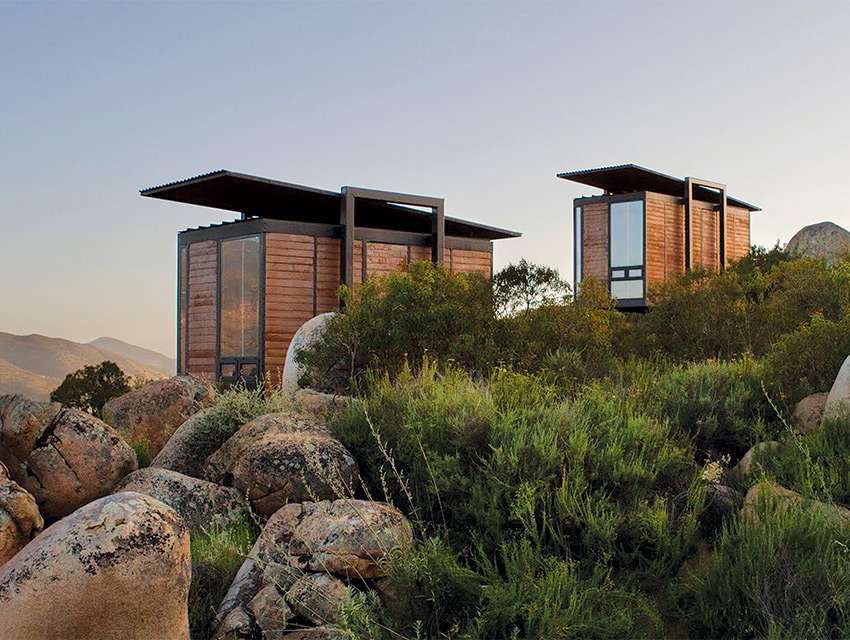 I’ve got no problems with Santa Barbara’s wine country, but there’s nothing quite like the emerging vineyards of Valle de Guadalupe in Baja California. Plus it’s a lot easier on the pocketbook, and the food is world-class, which means that as a food blogger I get to Instagram like a millionaire. Three hours after getting on the 5, my wife, Ariana, and I are through the new El Chaparral border gate into Tijuana—just in time for lunch.

Beyond the gritty auto repair shops and the tourist zone, we cruise into the upscale neighborhood of Zona Rio in search of the Food Garden, the city’s newest street-food court. Chef-turned-street-taco master Guillermo “Oso” Campos Moreno has a branch of Tacos Kokopelli here, and after lingering over grilled octopus marinated in Mexican-spiced pesto, and tacos with stewed, smoked marlin, we’re back on track. We jump on the curvy scenic toll road that skirts expat communities and beachfront hotels (some still abandoned after the real estate crash), the windows down and Tijuana native Julieta Venegas’s “Limón y Sal” on the radio.

At La Misión we take the free highway (the scenic route is closed here) and then the Ensenada-Tecate Highway. Passing wineries, unswept convenience stores, and roadside olive oil vendors, we’re on our way to the futuristic cabins at the Encuentro Guadalupe hotel. Clustered on a boulder-strewn hillside, the rectangular metal-and-wood-slat pods are minimalist, with floor-to-ceiling windows and industrial fixtures. Instead of a phone, you get a two-way radio, and instead of a TV, there’s a small deck with a hilly panorama. At the poolside restaurant Ariana and I sip nebbiolo, the sun slipping behind the mountains, before we make tracks for chef Benito Molina’s restaurant, Manzanilla. In less than half an hour we are diving deep into austere dishes like ink-soaked baby squid on a square of cured cactus, and spider crab dressed with basil sauce alongside the claw of a related crustacean dressed with al dente lentils. It’s some of the greatest seafood in Mexico.

And for one of the greatest breakfasts in the area, we start the next day at La Cocina de Doña Esthela. The maternal host makes her own queso fresco, cooks beef birría in an adobe oven, and stuffs empanadas with pineapple. Arrive early and you’ll be served at Esthela’s own kitchen table rather than in the dining room.

By midmorning we pull up to our first vineyard. Painted in earth tones with a stone facade, the visitor’s center at Las Nubes offers a perfect summer sipper of Kuiiy, a crisp, floral blend of chardonnay and sauvignon blanc. Later we stop at Viñas de Garza, whose stone cottage is adorned with bougainvillea and surrounded by grapevines. Outside on a sturdy picnic table, we sample Amado IV, a fantastic if unconventional blend of zinfandel, tempranillo, merlot, and cabernet sauvignon.

Not far west of the stoplight in San Antonio de Las Minas is the newish Malva, a Pacific Islander hut roosting on a rock patio. Chef Roberto Alcocer makes a rich rendition of crème brûlée with bone marrow and local cheese, laying a sliver of sea urchin on top. My wife and I also share fresh snake mackerel that arrives with sautéed wild greens and the malva flower. We pair it with wines from Mina Penelope, a vineyard we’re sure to hit during an afternoon of tastings.

Tomorrow we’ll drive to the shores of Ensenada, 30 minutes away, for a stroll on Estero Beach. The scenery is that much prettier after filling up at the renowned La Guerrerense street cart (you’ll find it in the tourist zone), which sells tostadas with ceviche made from sea urchin, cod, and mussels and topped with pen shell and pismo clams.

But on this night my wife and I aren’t about to miss dinner at Finca Altozano, one of the valley’s most romantic spots. Sipping local varietals on a deck built into a giant wood fermentation tank, we spend the evening eating dishes like lamb roasted in a caja china (Chinese box) and smoked marlin carpaccio beneath a dark country sky.