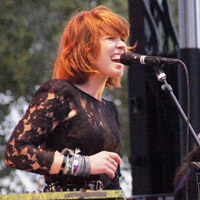 Grouplove knows exactly what’s in a name. Although they hail from different corners of the world, the five members of the Los Angeles rock band were brought together by their love for music — and for one another. Love is a word that comes up a lot when trying to describe the band’s six-degrees-of-separation origin story and its anthemic, high-energy sound. Here’s the simple version: Christian Zucconi (guitar, vocals), Hannah Hooper (keyboards, vocals), Sean Gadd (bass, vocals), Ryan Rabin (drums, producer) and Andrew Wessen (guitar, vocals) met at an artist residency in a mountain town on the island of Crete. Here’s the extended version.

“I love this story,” says Hannah Hooper, formerly a painter looking to leave New York. In 2009, she hit it off with Zucconi after seeing him perform in the Lower East Side. Unfortunately, she was leaving in a few days for an artist’s residency to which she’d been invited by Wessen’s brother. Hooper impulsively asked Zucconi to join her — in Greece.

“I was pretty thrown by that question. No one’s ever asked me that before,” says Zucconi while his bandmates feign shock. “I was having a tough time in New York, working shitty jobs and feeling depressed. This seemed like a good way to get out of that and hang out with Hannah, who’s so cool and made me laugh like no other person I’d met.”

Drained by the sleepless journey to Crete, the duo met Wessen on the first day.

Soon after, his longtime friend from Los Angeles, Ryan Rabin, arrived in Crete, as did London-born Sean Gadd, originally in Greece to visit his best friend, who had also been invited to the artists’ colony.

Every Friday, the members of the commune would share their art — Hooper, her paintings, and the guys, their songs which they played on an acoustic guitar they passed around. “Soon, we just fell in love with each other over all the music and influences,” Zucconi says.

The new friends kept in touch via email, but it was a year before they pooled their funds to meet up in L.A. “I came over to Andrew’s one day and they were all there wearing sombreros,” Rabin recalls. That night, Gadd played a song they’d never heard before and Rabin was blown away. He suggested they visit his family home in Burbank to mess around with recording. “It was supposed to be one day, but a month later, everyone had canceled their tickets and they were still living in my parents’ house.”

One song turned into eight, and the five friends turned into Grouplove, a band whose single, “Tongue Tied,” hit the No. 1 slot on the Billboard Alternative Songs chart this June. Things haven’t slowed much since their first show at El Cid in May 2010.

After an opening slot with Florence + the Machine in fall 2010, Canvasback/Atlantic Records re-released their eponymous EP in January 2011, leading to a co-headlining tour with Foster the People and a string of festival appearances from Lollapalooza to Glastonbury.

Since the September 2011 release of their debut album, Never Trust a Happy Song — a set of danceable tracks with deceptively weighty lyrics — they have toured with Young the Giant, rocked KROQ’s Almost Acoustic Christmas, and hit even more festivals including Coachella and Mumford & Sons’ one-day confab in Monterey. Now, they’re headlining their own tour, which wraps up at the Wiltern on November 17.

After that? “End scene,” sighs Hooper. Exhausted, the band will be off from January to March to write a new record and decompress. “Everyone’s so different in so many ways, but put us all together and we’re like the same person,” Gadd says. They even have matching Grouplove tattoos on their right forearms. “We’re like the Spice Girls!” Hooper jokes. But when talking about the band’s creative interplay, she turns serious. “We understand that when we all agree and are honest, there’s something magical that happens here.”