Home Uncategorized Voom With A View 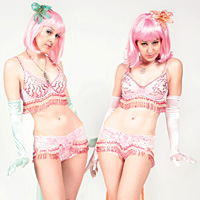 The mix of Mexican wrestlers and nouveau burlesque queens that seemed so improbable when Lucha VaVOOM debuted in 2002 is now proven entertainment. After a decade, cofounders Rita D’Albert and Liz Fairbairn still draw crowds three or four times a year with their camp spectacle of bone-rattling body slams and shaking moneymakers. D’Albert not only oversees the show, she takes the stage as Ursulina. “The wrestling is so acrobatic and exciting that when the dancers come out, they have to hold their own,” she says. It’s not enough to merely don a mask or look sexy while disrobing. Roky Roulette strips while on a pogo stick. Mini wrestler L’il Chicken, who stands four feet three, enters by bouncing onto the stage on his butt and flapping his wings to the music. The Poubelle Twins started as dancers but soon switched to wrestling.

The lineup now includes contortionists, trapeze artists, and a preshow lowrider parade. “The convergence of elements could only have happened in L.A.,” D’Albert says. For its tenth anniversary extravaganza on May 4 and 5 at the Mayan Theatre, Lucha VaVOOM is doing something that seems so obvious, it’s surprising it didn’t happen sooner: a Cinco de Mayo show. “New York has Saint Patrick’s Day. New Orleans has Mardi Gras,” says D’Albert. “We thought, ‘Why not give L.A. its own carnival, one that is intrinsically entwined with what we do? The attempt is to start a giant conga line. Who wouldn’t want to be in one?’”