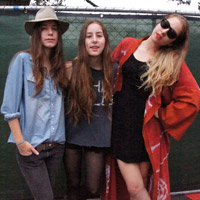 They’re cracking “Best Of” lists from coast to coast, Sara Bareilles wants to be in their band, and somewhere in London, Florence Welch of Florence + the Machine can’t wait to dance to them in her kitchen. They’re Haim, a band of “three sisters and a mister” who proudly call the San Fernando Valley their home. Playing a percussive blend of R&B and classic rock, siblings Este, Danielle, and Alana Haim and drummer Dash Hutton recently closed out a run opening for Mumford & Sons on the American leg of their latest tour. That’s after rattling SXSW in March of this year with a roaring live set. Pretty impressive for a band that hasn’t released anything except a three-track EP (Forever). But don’t let their limited musical output fool you into thinking they’re newbies. Thanks to their musical parents, the Haim girls were holding drumsticks before they could hold up their own heads.

“Music was always in our house,” says 24-year-old bassist Este. “When I was 10, our dad woke up our mom and said he had a dream he was going to have a band with us. Alana was like 4 at the time, so it was kind of a crazy dream to have.”

The next day, papa Haim brought home a bunch of used instruments, and the family band, Rockinhaim, was born. With dad on drums and mom on guitar, the Haims played local fairs and charity gigs. Imagine the von Trapps, with fewer frocks and more Fleetwood Mac.

The Eagles, Billy Joel, Van Morrison, Santana, the Beatles, the Rolling Stones — the girls played the classic rock that their parents loved. “Anything on K-EARTH 101,” says Danielle, 22, who plays lead guitar. Other favorite LA stations like KROQ, KIIS FM, and the WAVE scored their lives and shaped their developing sound.

“[When we started,] Alana could barely reach the timbales she was playing, but it was something we did for fun to bring our family together,” Este says as her sisters nod in agreement. “And it worked, because now we’re thick as thieves.”

With no distributable material and no long-term plan, the girls began performing without their parents in 2007. “We had no idea what to do,” Danielle explains. “We had a couple songs on MySpace but, essentially, we just waited around for our friends’ bands to ask, ‘Oh, do you want to open?’”

While Este attended college at UCLA, Danielle joined the touring bands of Strokes frontman Julian Casablancas and singer-songwriter Jenny Lewis, and Alana finished high school. “By the time we sat down and discussed the last few years, we really hunkered down and said, ‘We’re about to do this,’” says Alana, 19, who plays every instrument Danielle and Este don’t. “We made a promise to be together.”

Since then, Haim’s prospects have grown brighter. They take off for their first European tour in November and have a full-length album tentatively slated for next year. After opening for the xx at the Fonda in July, they’ll return to the venue with Twin Shadow on October 18. Even as they find success on their own, they credit their stint opening for Casablancas with inspiring them to consider their creative goals.

“We were always serious, but that show was the kick in the ass to make us see that this could happen,” Este says, while Alana recalls the thrill of spotting the band’s name in lights with his. “It made us see that this was something we could do together for a long, long time.”