Home Film There Will Be Blood 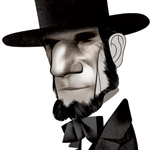 The American Jesus, Abraham Lincoln was murdered for his country’s sins on Good Friday (though, to be precise, he died from his gunshot wound the next morning), and no sooner had his body finished the long train ride home to Illinois—the tracks lined with hundreds of thousands of mourners—than he took on a kind of divinity. Canonized he remains, notwithstanding efforts by skeptics in the last half of the 20th century to cut him down to size for racial attitudes that were so 19th century. Any actor portraying Lincoln who resolves to separate the man from the myth fails before he’s started because the myth became part of the man before he was dead. Daniel Day-Lewis’s incarnation in Steven Spielberg’s Lincoln encompasses both man and myth, the former of which is missing from Henry Fonda’s hagiographic if haunting Young Mr. Lincoln in 1939, the latter from Sam Waterston’s admirably down-to-earth miniseries Lincoln in 1988. To the extent anyone has been able to keep tabs, more than two dozen other actors have played Lincoln dating back to 1910, including Gregory Peck, Raymond Massey, Hal Holbrook, a Muppet, and a robot at Disneyland. Spielberg’s isn’t even the only movie about Lincoln this year, the 16th president having been depicted six months ago swinging his rail-splitting ax in the vicinity of vampires.

If Lincoln is among history’s truly great men, he didn’t achieve that stature until his final three years. This was when his long-held antipathy to slavery cohered into a dedicated hostility that gave larger purpose to the Civil War and also confirmed the logic of Lincoln’s destiny. Five years after condemning the insurrectionism of John Brown, the president plotted in the Oval Office with abolitionist and escaped slave Frederick Douglass guerrilla raids on Southern plantations that would enforce the 1863 proclamation liberating Confederate slaves, something many in the administration’s cabinet considered alarming and rash. Near the conclusion of Spielberg’s film, when Lincoln expresses support for African Americans’ right to vote, we realize how potentially revolutionary is his ongoing transformation. What makes Lincoln so tempting and daunting to an actor is how much the man was a work in progress, beset by demons and the doubt and depression that led friends to put him on suicide watch a couple of decades earlier and, by the time he got to the White House, manifested themselves as nightmares and hallucinations. Occasionally transcending and often utilizing his imperfections, operating less from an epic vantage point than from the trenches of constitutional conflagration, Day-Lewis’s Lincoln is a man racing against mortality in his last four months, hasty to fulfill his fate before he sinks into dark reveries where he’s forever adrift on a boat sailing nowhere.

Struggling to end the war and to eliminate slavery once and for all by way of the 13th Amendment, with the amendment’s prospective passage undermining the effort to make peace with the Confederacy and vice versa, Lincoln embodied the Great Man theory that leftists disdain. As was true for Napoleon before and Churchill after, neither Lincoln’s country nor century would be as we know them today but for this unlikeliest of presidents with the slimmest of résumés, whose rise over better-known and more powerful national figures such as William Seward, his secretary of state (played by David Strathairn), was either cosmically flukish or providential. This sense of the monumental is the burden that Day-Lewis’s performance carries. His Lincoln isn’t a feat of uncanny impersonation but psychological imagination, an invasion and occupation of one of the ages’ most extraordinary innerscapes. Actor and subject alike work both sides of the man-myth divide: Lincoln is the unschooled genius who gets his grammar wrong but always thinks three steps ahead of the more intellectually sophisticated men around him, the vulgarian driving everyone to distraction with barely relevant tall tales who brings a singular lyricism and moral vision to the causes of union and freedom that he makes inseparable, the pushover who conserves and calculates his wrath for that exquisite moment when the opposing arguments have exhausted themselves, the paragon of honesty who wheels and deals his way to a solution that he sees as worthy of his corruption, in at least one case committing a clear and impeachable duplicity.

Though Day-Lewis himself probably doesn’t know how he found his way to this Lincoln, he certainly got assistance from the screenwriter, Angels in America’s Tony Kushner. Adeptly managing the requisite exposition of historical information, Kushner’s script captures the vehemence of 1865 discourse (that makes our bemoaned politics of today sound mild), something to which Tommy Lee Jones brings particular gusto as radical congressman Thaddeus Stevens, a fitfully impatient ally of Lincoln’s at best. If some scenes are stagy, such as a conversation amid the White House porticos between the president and the former slave who is his wife’s dressmaker, they avoid being preachy or extraneous; and fashioning what is as much political thriller as biopic, Spielberg’s direction is especially understated. Only briefly does he flirt with his usual sentimentality at the end, instead making rigorous and counterintuitive storytelling choices (the rendering of the assassination, for instance) and jettisoning big movie moments for the verisimilitude wrought by Janusz Kaminski’s muted twilit cinematography. Nearly irresistible scenes justified by fact, such as Lincoln’s entrance into Richmond, where he was mobbed by exultant blacks, have been sidestepped altogether by a filmmaker cognizant that, true or not, they too glibly speak to white liberal self-congratulation; if anything, the film’s prologue implies that black soldiers fighting for the North understood the Gettysburg Address better than its author. Even John Williams’s typically egregious music is on relatively good behavior.

Lincoln is impressive enough to almost make you forget how much Daniel Day-Lewis dominates the endeavor. By all accounts, as an actor he takes the Method to lengths that Robert De Niro would consider cracked; down to his heartthrob looks and the biographical details of a wild youth and bohemian parents, he couldn’t more personify every romantic cliché of what it means to be an actor if he tried. Stories of Day-Lewis never breaking character during long months on There Will Be Blood and living in the woods in preparation for The Last of the Mohicans and contracting pneumonia because he wouldn’t change into modern clothing while shooting Gangs of New York and having a nervous breakdown from seeing his father’s ghost onstage in Hamlet make your eyes roll—Stanislavski crossed with Saturday Night Live—until you come up against results that brook no argument. Some will be dismayed by a Lincoln so human as to speak in the high Midwestern twang of record and to stride through the White House in a simian lope rather than intoning sonorously and carrying himself in the manner of a shrine, and others by a Lincoln who evokes the supernatural depths of a prairie-born messiah. The reconciliation of the two is the measure of this achievement by our greatest living actor; only Meryl Streep, Sean Penn, and Denzel Washington are in the same league, with time yet to tell about Kate Winslet. Day-Lewis’s research remains mysterious, but his Lincoln is closest to that of Walt Whitman, who spotted the president on an almost daily basis between his first inauguration and John Wilkes Booth’s fatal intervention. In bearing such personal witness, Whitman fell in love with the man. “O captain! my captain!” he beseeched the martyr on his death, “rise up and hear the bells!” and in the form of Day-Lewis, with the poet in his ears, the captain has.