Home Film The Vinyl Weighs a Ton but the Movie is Only 90 Minutes... 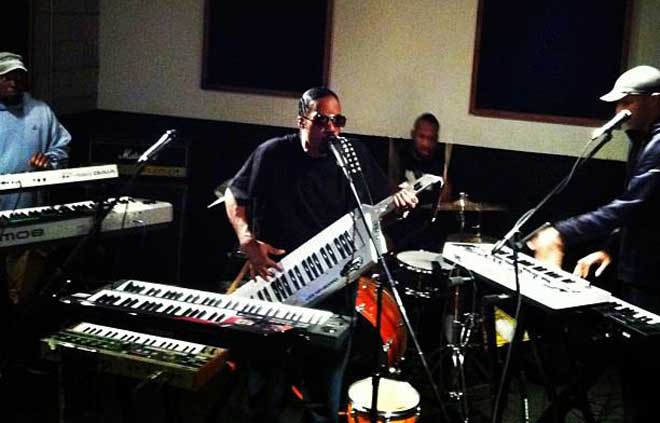 To describe the music released by Los Angeles label Stones Throw Records as “eclectic” or “left-of-center” is an understatement on par with saying Kanye West has an ego. The diamond in the rough of indie record companies, Stones Throw was founded by Chris Manak (aka DJ Peanut Butter Wolf) in 1996 and has put its weight behind hip-hop, world music, and modern funk—to name just a few genres. The influential homegrown music label gets its due in Our Vinyl Weighs a Ton (This is Stones Throw Records), a new documentary that premieres tonight at the Los Angeles Film Festival.

Directed by Jeff Broadway, the movie chronicles the origins of Stones Throw Records and its roster of acclaimed recordings by mostly local performers like neo-folk/jazz band The Stepkids, early hip-hop artist Charizma, and modern funk musician Dam-Funk. Mining archival footage, live concert material, and interviews with DJ Peanut Butter Wolf and other founding members, the documentary explores the label’s roots, its successes, and the relationships that were forged in and around the avant-garde company. Perhaps the most important of these is the story of Peanut Butter Wolf’s friend, hip-hop artist Charizma, who died at the age of 20 after being shot.

The documentary mirrors the rhythms and life of the records that Stones Throw has produced. Inventive camerawork combined with smooth editing and an eclectic mix of material keeps the movie rolling along. You don’t have to be a hip-hop aficionado or much of a music fan to be entranced by the compelling story and intimate remembrances. Complimenting the visuals is a sound mix that will not be silenced or shunted aside as mere background music; yet it never overwhelms the story. The music is crucial but it doesn’t overshadow the film’s focus: the people who inspired and built Stones Throw Records through the years.

Two decades after its founding and despite the tragedy of Charizma’s murder, the label remains defiantly unique. Late this summer or in the early fall the label will release the new album from Jonwayne, a member of the LA beat scene, that includes a track (over a J Dilla beat) appearing on the forthcoming mixtape, Marion Morrison. Until then, there’s an upcoming Stones Throw tour in the works, so keep your ears open and your speakers pumpin’.