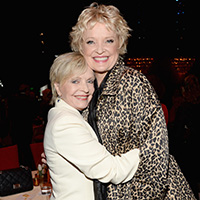 Yesterday I found myself on the Dorothy Chandler stage in an old skirt (the invite said “vintage couture”) and trying to eat a salsbury steak slider (bad idea) gracefully. How did I make it onstage despite the fact that the opera would have to make a new category for me—Snortprano? The Music Center kicked off its 50th Anniversary with a launch party onstage. The BIG bash weekend is December 6th and 7th. The theme for the launch last night was The El Dorado Party, as 55 years ago, the auctioning off of a Cadillac Eldorado (at the Ambassador Hotel) raised $400,000 plus starting the campaign that built The Music Center. In 2014 they had a Cadillac ELR (luxury plug-in hybrid coupe) at the bash. The times, they are a-changin’.

What a view from onstage. I have been in the audience more times than I can even recall, but to see it from the performers’ points of view? Huzzah! I was joined onstage by all the Center’s Board Members and many of The Blue Ribbon ladies (the premiere fundraisers for The Music Center) including Prez Carla Sands. Since the theme hearkened back to the ’50s/’60s, there were martinis, champers in coupe glasses, beef wellington and deviled quail eggs. Christine Ebersole sang her heart out on tunes like “42nd Street” and one that made me weepy sitting next to Blue Ribbon-er Ginny Mancini, who closed her eyes and sang along as Ebersole crooned a version of Mancini’s late husband’s (Henry Mancini) Oscar winning song (1961)—“Moon River.”

Photographs by The Music Center