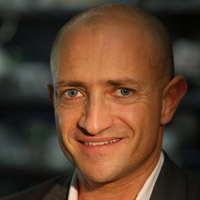 [We’re always excited to announce the winners of the annual MacArthur “genius grants.” But what happens after the spotlight fades? In this series, we’ll check in with the 2012 local winners of the MacArthur Fellowship.]

It’s the smarty pants equivalent of having Ed McMahon show up at your door with a giant check: Winning a MacArthur Foundation “genius grant.”

“It was one of the few times in my life I was speechless,” says Sarkis Mazmanian, who learned last month that he had been named a MacArthur Fellow, a prestigious award that comes with a $500,000 bonus. The prize is intended to provide seed money for various “intellectual, social, and artistic endeavors.” Part of its appeal is its mystery: Winners don’t even know they’ve been nominated unless they receive a call telling them they’ve won.

Mazmanian, a professor of biology at Cal Tech, became fascinated with the cleverness and versatility of microbes over a decade ago. There are more than 100 trillion bacterial cells in our bodies, and while most microbiologists study the “bad guys” that cause infections, Mazmanian decided to go off the beaten path and research the possibility that there are beneficial microbes protecting us from disease. While we scientists have known for many years about the multitudes of organisms living inside of us, nobody was studying why our immune system doesn’t attack them. What are they doing in our guts? Why do our bodies allow them to stay? Mazmanian’s research has shown, for the first time, that specific gut bacteria are vital for the development of the immune system in animals. The absence of these bacteria may also be the cause for ailments such as inflammatory bowel disease, obesity, and perhaps even autism. These findings may allow scientists to target infections in entirely new ways.

In the scientific community the Catch-22 is that you need federal funding in order to conduct research, but you can’t get federal funding unless you already have enough proof of your hypothesis to justify further study. The MacArthur Fellowship allows Mazmanian to bypass all of that. “That’s where funding like this comes in handy,” he says. “We can try out a few ideas and see which ones pan out, then use those findings as preliminary data to go get traditional funding.”

Mazmanian, who’s of Armenian descent, is also very engaged in international outreach programs and frequently travels to Armenia to teach. He has seen that most developing countries have little funding for research and education; in some cases, scientists don’t even have the basics to set up a laboratory. Mazmanian is hoping he can supply some of the needed equipment and training. “The way I see it is that this is what [the MacArthur grant] was intended for, to do something bigger than you could have done otherwise,” he says.

How else does this master of the microscope hope to help mankind? “People want to grow up and be rock stars or athletes or something,” Mazmanian says. “Very few people say, ‘I want to grow up and be a microbiologist.’ Hopefully, that’s where the award will come in to help people. Getting the message out that scientists are doing good things.”