Home Uncategorized The Church on York: Worshipping at the Altar of Concerts and Community 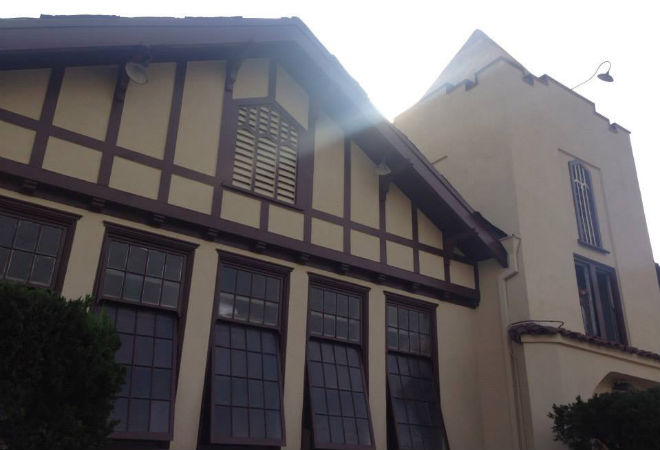 The Church on York, an aptly named new music and art space located in an old church on Highland Park’s evolving York Boulevard, opened its doors to great fanfare last November. In addition to the handful of epic concerts the space had already hosted—on Valentine’s Day the Church hosted the farewell concert for indie pop darlings Vivian Girls—the hype stemmed from the fact that the Church on York is the brainchild of Graeme Flegenheimer, a 22-year-old former music publicist whose industriousness has earned him the nickname “Baby Gatsby.”

Along with his partners Jezenia Romero and Evan Dubinsky, Flegenheimer wants to create a safe space and a community platform for the residents of Highland Park. You can find everything from art exhibitions and concerts to dance lessons and twelve-step meetings at the Church on York. The venue also offers affordable South American comfort food from its kitchen, which Romero runs. This Friday, the Church on York hosts singer-songwriter Marissa Nadler and Canadian retro-rockers Pink Mountaintops at 8 pm.

“I used to work in the music industry,” Flegenheimer says, “but I was getting bummed out about how music is treated like a commodity.” To escape the monotony, he started throwing parties last year at his house in Highland Park and spicing things up with concerts on his balcony. “We had one particularly memorable 4th of July party last year. That night I ended up looking on Craigslist for spaces close to where I live,” Flegenheimer says. One of the listings was for an old church on York Boulevard. He signed the lease two days later.

The mission was clear from the beginning: “I fell in love with the idea of this place because it enables me to host shows and provide people with a space where they can have fun, be creative, and express themselves,” Flegenheimer says. The history of the building was also part of its appeal. “I think what sold me on the building—which is 101 years old—was the fact that it’s so beautiful. It’s all Douglas fir wood. There’s a care and love here that you don’t see in new buildings.”

The Church on York has hosted concerts, comedy nights, and other events, but Flegenheimer is looking to expand the venue’s offerings. “Mickey Madden and James Valentine of Maroon 5—who have also donated fiscally—are going to start a class here in March where kids enrolled in the school district can learn how to play bass and guitar,” says Flegenheimer. “Blackie Onassis, who used to be in Urge Overkill, and Patty Schemel, who played in Hole, are going to teach drums later on.”

“We’ve received unanimous support from the local community,” Flegenheimer explains. “We try to involve all the local business around here. I want to keep the relationship to the local community as symbiotic as possible. We definitely want to serve the people living in northeast Los Angeles with this space.”

Flegenheimer and his partners have big plans for 2014, including a handful of semi-secret springtime concerts. There’s also a film festival in May, which Flegenheimer says will be a learning-by-doing kind of process. “We’re not trying to compete with established art museums or venues,” he says. “What we can do is put a spotlight on artists you might not see at a regular museum, or a band you might not see at a regular venue.”

That the Church on York is first and foremost a community space rings true with the building’s original purpose. Flegenheimer has even hired a historian to make the case for the church’s designation as a historical landmark. “I just want to make sure that the building is protected forever and not turned into condos,” he says. “It’s a 101-year-old building. You don’t see a lot of those in Los Angeles.”

On February 21, the Church on York presents Marissa Nadler and Pink Mountaintops.