Home Film The Art of Violence 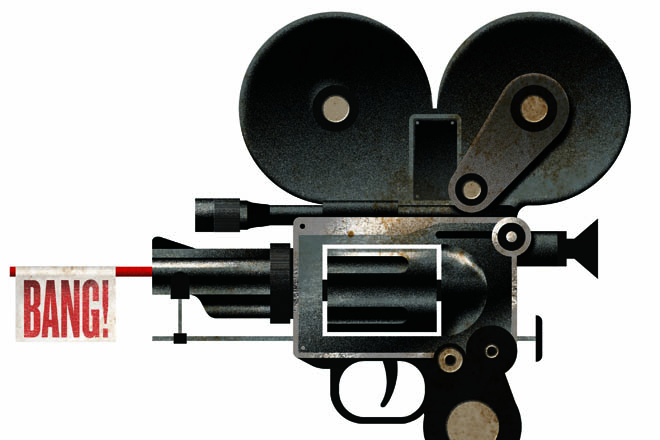 The movies have been in the news lately, or to be precise, the news has been in the movies. Sometimes the news is old enough (150 years in Lincoln) to be called history, and sometimes the history is so young (22 months in Zero Dark Thirty) as to still be news. Sometimes the news overwhelms the movies, as when 20 kids and six of their teachers and school officials were slaughtered by a psychotic young gunman in Connecticut a week and a half before the release of the most violent picture that filmmaker Quentin Tarantino has made, Django Unchained. Escapism always has its place, but when movies connect to other things around us and suggest implications that haven’t been considered before, that’s a dividend, too, even when our love of movies becomes complicated as a result.

The more that’s at stake besides creativity and commerce, the more potent these implications are. Argo has generated little controversy—as it has to do with the film’s portrayal of American hostages’ escape from Iran in 1980—despite the fact that director Ben Affleck’s souped-up storytelling in the last half hour is as false factually as it feels dramatically. In terms of our own lives and times, Argo’s accuracy doesn’t matter. Zero Dark Thirty, on the other hand, was setting off backlashes and then backlashes to the backlashes before its release; when people are arguing vehemently about a movie they haven’t yet seen, that’s the point at which conversations take on more heat than light. Once you do get around to watching Kathryn Bigelow’s epic about the decade-long hunt and eventual elimination of Osama bin Laden, you’re aware, for starters, that it’s not about torture; the notorious scenes of waterboarding occupy the first half hour of a two-and-a-half-hour running time. You may also note that, claims to the contrary, the movie doesn’t endorse waterboarding, which won’t surprise anybody familiar with Bigelow’s work in general (like her last picture, the Oscar-winning The Hurt Locker), since such a stance would be at odds with her typically neutral modus operandi as a filmmaker if not with her politics, too, whatever they might be.

Less clear is whether Zero Dark Thirty is accurate and whether it has a greater responsibility to accuracy than Argo or other movies. The answers to those two questions are “maybe not” and “probably.” The film does imply that information gleaned from a process including torture (but not extracted by torture directly) led to the identification of someone who in turn led to bin Laden’s whereabouts. Zero Dark Thirty is a very good movie—the director’s best and as well made as any American film in 2012—and the motion picture academy’s refusal to nominate Bigelow for an Oscar is unfortunate, perhaps cowardly. It’s reasonable to contend, however, that whatever role torture played in the bin Laden mission is hardly inconsequential and something that Bigelow and writer Mark Boal should want to be careful about. The case against torture as American policy is that it’s not only immoral but ineffectual, likelier to produce information that’s bad and counterproductive rather than reliable or useful; if that’s true, audiences are being profoundly misinformed by Bigelow and maybe willfully deceived. Zero Dark Thirty’s controversy recalls in smaller and less flamboyant measure Oliver Stone’s JFK 20 years ago, which flatly maintained that the assassinated 35th president was the victim of a massive conspiracy involving, well, almost everyone you can think of, not least his successor, the 36th president. While Bigelow’s movie assumes the dispassionate tone and occasionally the look of a documentary, it doesn’t go so far as to propose it is one, whereas the Stone picture, with its staged documentary footage, certainly meant to convey a verisimilitude beyond mere reenactment. Like Zero Dark Thirty, JFK was a work of extraordinary skill albeit rather less subtle about duping the audience. But then Stone is less subtle about everything.

When people start yammering about artistic responsibility, artists become wary. The subtext of such talk is that the arts need to be regulated, which is to say censored. Artists feel as if they’re scapegoats for a lot of things, including the Connecticut massacre last December, which those who oppose any control of guns believe would be better addressed by controlling movies and their cousins, television and video games. Of course the gun lobby’s concern about media violence is expedient and cynical, like its newfound concern about the plight and care of the mentally ill. There’s also no question, however, that—as seen in Texas Chainsaw 3D, tops at the box office less than a month after the Newtown tragedy—violence in films has reached a level that can only be called inhuman. At the least, Tarantino’s aggrieved and volatile rejection of any connection between social violence and film mayhem is a case of protesting too much (“I refuse your question,” the director finally lashed out at one reporter in the spate of interviews following Sandy Hook. “I’m not your monkey.”), but more than that, he essentially argues on behalf of movies’ inconsequentiality. When we absolve movies of possibly inspiring a monstrous response among people in whom the monstrous already lurks—and who then have easy access to magazine-fed firearms like the Bushmaster ACR and the AR-15—we disallow the possibility of inspiring nobility. For thousands of years we’ve insisted that art can make us better people. Unless a brief can be fashioned that by its very nature art appeals only to the best in people and never the darkness, which defies both logic and intuition, then we have to acknowledge that art can make some of us worse.

Before the letters and e-mails pour in pointing out copious violence in everything from Shakespeare to Homer to the Bible, let’s add that there’s obviously a place for violence in art. The first two parts of The Godfather, which can lay claim to being the Great American Epic, were violent not only by the standards of their day but are still pretty lively as garrotings, severed horse heads, and bullets in the jugular go. The notion of artistic responsibility begs questions with no satisfactory conclusions, the most inevitable and ineffectual being that we should just keep thinking and talking about it, given that the alternative—a governmental body monitoring the movies we make and see—is unacceptable. But when films intend to be provocative or sensational in their political perspectives or depictions of violence, and then take themselves off the hook with declarations of being “only a movie,” they trivialize themselves, something we might presume either Bigelow or such a cinemaphiliac director as Tarantino would be loath to do. To accept responsibility for art is to champion it and say that ideas matter, stories matter, imagery matters, and that because these things matter they must be free, even as freedom has consequences that aren’t always as welcome as freedom.