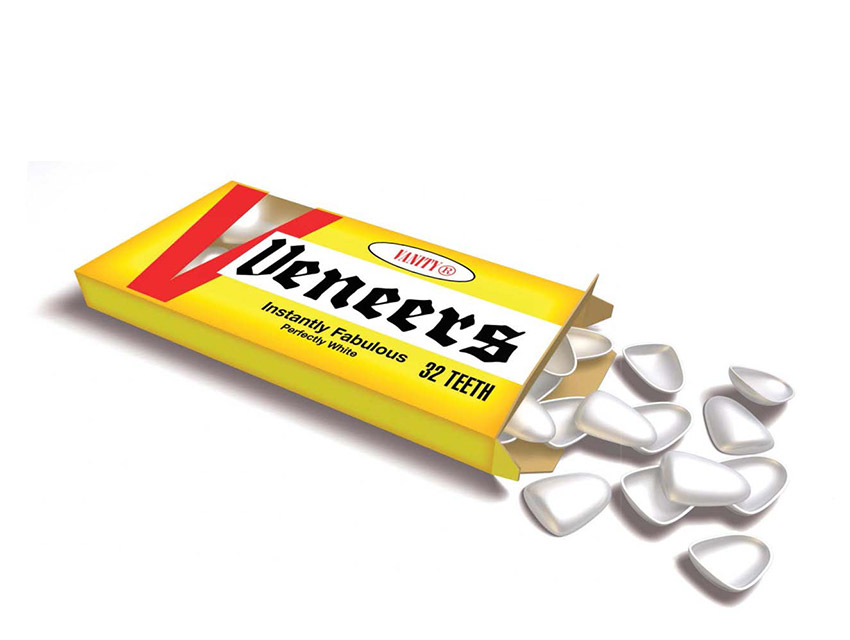 Share
Email
Facebook
Twitter
Pinterest
ReddIt
I’d always suspected cameras are the reason people get cosmetic surgery. Now I’m sure of it. Because after a lifetime of happy obscurity as a writer—first of TV news, then of scripted series like Mad Men, and most recently, of books—I went on the Today show and got “discovered” at the age of 47. On Tuesday I’m sissing-down with Hoda and Kathie Lee about my book Why You’re Not Married…Yet. That Friday I’m offered a hosting job on a new reality dating show. By Saturday I start wanting new teeth.

You see, the camera is a lot like Santa Claus. It knows if you’ve been bad or good. It sees the cigarettes, the sugary snacks, the nights willfully spent sleeping on your side instead of your back, like the women’s magazines tell you to. The camera isn’t your friend; it’s more like your frenemy—someone who seems all nice and then later you find out, usually via Google Alerts, that the so-called friend has actually been talking shit about you. Anyone who’s ever launched Skype or FaceTime and looked at that video reflection in horror has enjoyed an inkling of what I’m talking about.

It’s not that these chompers are that bad. They’re just not ready for prime time. So I ask around. An on-camera friend gives me a name. “This is The Guy,” she says. “Tell him I sent you.” The very next day I am lying back in a dentist’s chair, caringly covered in a fluffy white blanket to ward off the chill of the air conditioner. In breezes Bill Dorfman, D.D.S., tooth dealer to the stars. For approximately the price of a new roof on my house, Dr. Dorfman says, he will hook me up. After describing what he plans to do, Dr. Dorfman throws on some temporary veneers so I can see what he has in mind. I look in the mirror. Are you kidding me? These teeth are a revelation. Dr. Dorfman isn’t just going to make me camera ready. He is going to give me a whole new childhood! The one where I’m from Newport Beach and my dad never went to federal prison.

I’ve heard that teeth are the marijuana of the cosmetic surgery world. This “soft” procedure leads to bigger, badder experimentation involving implants, needles, knives. One look at these teeth and I get it. You objectify one part of your body, and you’re tempted to objectify the whole damn thing.

But I’m not going there. I’ve always felt that aging is a tunnel we go through—sort of like adolescence, except to the other end of life. There’s an awkward period between the ages of, say, 53 and 67, where everything starts moving around. South, mostly. I can see it happening already, even if no one else can. The whole thing is a test: of character, of strength, of will.

The temptation is to commit hubris and try to stop time altogether. Sure, I can slow it down some—a decade, maybe two if I luck out. Go ahead, paint the walls, refinish the floors, bring the electrical up to code. But I have to beware doing the cosmetic surgery equivalent of a Better Shelter flip—where I toss an Ikea bathroom, cement floors, and CaesarStone countertops into a Highland Park bungalow, then paint the front door some cool shade of green. Because a few years on, the green door that at first looked so great suddenly seems cheap. And obvious. And dated.

Every once in a while I see women who’ve made it through the tunnel without hitting the panic button—and they look gorgeous. Yes, they have aged. But when you see them, you realize aging isn’t ugly; fear is. Period details intact, such women make it to the other side more beautiful than ever. I want to be one of them. Not an easy feat in Los Angeles. But I think I can do it—even on camera.