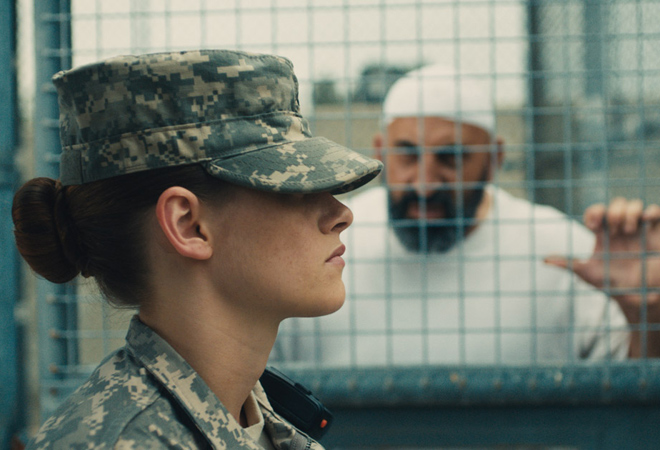 The 2014 Sundance Film Festival is upon us. For 10 days, those who make, distribute, write about, and love movies will spend their time dashing around Park City, either freezing in the Utah winter or sitting comfortably in theaters. While January is a dumping ground for wide releases, many movies that you’ll be hearing about later in the year will debut at this festival.

Although it’s a couple states away, the festival has strong ties to Los Angeles, maintaining an office in the very same building as Los Angeles magazine and featuring work by numerous filmmakers based in the city. With the festival’s opening night occurring this evening, here are nine buzzworthy films with strong L.A. ties. Look for them to make waves as they premiere.

Camp X-Ray
Written and directed by Peter Sattler
Category: U.S. Dramatic Competition
Synopsis: A young woman is stationed as a guard in Guantanamo Bay where she forms an unlikely friendship with one of the detainees.
L.A. Connection: Though set in Cuba, the film was shot here. Sattler is also an L.A. resident.
The Buzz: Twilight actress Kristen Stewart stars in the film, aiming show she’s more than a teen star. Controversies over Guantanamo Bay have dimmed but events like the continuing hunger strike by detainees remind us that the prison hasn’t gone anywhere and none of the issues around it have been resolved.

The Case Against 8
Directed by Ben Cotner and Ryan White
Category: U.S. Documentary Competition
Synopsis: A behind-the-scenes look inside the case to overturn California’s ban on same-sex marriage. Shot over five years, the film follows the unlikely team that took the first federal marriage equality lawsuit to the U.S. Supreme Court.
L.A. Connection: This is a thoroughly Californian story. It’s uncertain whether L.A. will play any significant role in the proceedings, but the issues the film explores are relevant to many Angelenos.
The Buzz: One of the greatest virtues of a documentary is that it can tackle social issues more directly than any other genre, which often take a few years to catch up. Less than a year after Prop 8 was overturned, we get to see how it came about.

Cesar’s Last Fast
Directed by Richard Ray Perez and Lorena Parlee
Category: U.S. Documentary Competition
Synopsis: Inspired by Catholic social teaching, farm worker-turned-activist Cesar Chavez risked his life fighting for America’s poorest workers. The film illuminates his devotion and personal sacrifice, the birth of an economic justice movement, and delves into an untold chapter in the story of civil rights in America.
L.A. Connection: Perez lives in L.A. and his father was a farm worker while Parlee, who died in 2006, was Chavez’s press secretary and spokesperson, and shot much of the historical footage used in the film herself.
The Buzz: This is not the only movie about Cesar Chavez coming out this year. A biopic starring Michael Peña and directed by Diego Luna is also being released. As issues surrounding immigration and workers’ rights come to the fore in our national discourse, it’s a prime time to learn about Chavez and his life.

Dear White People
Written and directed by Justin Simien
Category: U.S. Dramatic Competition
Synopsis: Four black students attend an Ivy League college where a riot breaks out over an “African American” themed party thrown by white students. With tongue planted firmly in cheek, the film explores racial identity in “post-racial” America while weaving a story about forging one’s unique path in the world.
L.A. Connection: Simien lives in and has worked in L.A. for years.
The Buzz: With each passing year, more and more festival films are crowdfunded projects. Dear White People was financed with the help of Indiegogo. This is the kind of movie that might not otherwise have been made, dealing as it does with a touchy subject. (Full disclosure: I donated to the film’s Indiegogo campaign and my name appear in the credits.)

Imperial Dreams
Directed by Malik Vitthal. Written by Malik Vitthal and Ismet Prcic
Category: NEXT
Synopsis: A 21-year-old reformed gangster’s devotion to his family and his future are put to the test when he is released from prison and returns to his old stomping grounds in Watts, Los Angeles.
L.A. Connection: Vitthal is an L.A. native and USC alum. The film isn’t just set here, it was shot here.
The Buzz: The script, which Vitthal developed at the 2011 Sundance Screenwriters Lab, earned multiple grants and accolades. Star John Boyega made a big splash with his turn in the acclaimed Attack the Block and many (including us) have been eager to see what he does next. More importantly, the movie looks at a side of America that often goes ignored by pop culture.

Infinitely Polar Bear
Written and directed by Maya Forbes
Category: U.S. Dramatic Competition
Synopsis: A manic-depressive mess of a father tries to win back his wife by attempting to take full responsibility of their two young, spirited daughters, who don’t make the overwhelming task any easier.
L.A. Connection: Forbes is an L.A. native.
The Buzz: Former Larry Sanders Show writer and producer Forbes makes her feature debut. Mark Ruffalo is the star, and he’s had great Sundance success before, earning an Oscar nomination for 2010’s The Kids Are All Right. All the ingredients for something intriguing are in place, even if the plot description sounds generic and the title makes no sense.

Love Child
Directed by Valerie Veatch
Category: World Documentary Competition
Synopsis: In Seoul, a young couple stands accused of neglect when “Internet addiction” in an online fantasy game leads to the death of their infant daughter. Love Child documents the 2010 trial and subsequent ruling that set a global precedent in a world where virtual is the new reality.
L.A. Connection: Veatch lives in L.A.
The Buzz: Along with Web Junkie, this is one of two documentaries at the fest to deal directly with “Internet addiction,” but it’s one of many films that explore Internet-related topics.

Low Down
Directed by Jeff Preiss. Written by Amy Jo Albany and Topper Lilien
Category: U.S. Dramatic Competition
Synopsis: Based on Amy Jo Albany’s memoir, Low Down explores her journey to adulthood while being raised by her father, bebop pianist Joe Albany, who teeters between incarceration and addiction in the waning bohemia of Hollywood in the ‘70s.
L.A. Connection: Preiss is a resident. The film was shot here though made to look like a now-gone version of the city.
The Buzz: The film packs an all-star cast with John Hawkes as Albany and Elle Fanning as Amy. Not to mention Glenn Close, Lena Headey, Peter Dinklage, and Flea from Red Hot Chili Peppers (who also produced). Joe Albany led a fascinating life, one that’s ripe for cinematic exploration. Many were astonished that Hawkes’s turn in the 2012 Sundance favorite The Sessions didn’t net him an Oscar nomination. Perhaps this year he can earn the mainstream accolades he richly deserves.

Whiplash
Written and directed by Damien Chazelle
Category: U.S. Dramatic Competition
Synopsis: Under the direction of a ruthless instructor, a talented young drummer begins to pursue perfection at any cost, even his humanity.
L.A. Connection: Chazelle is one of our own.
The Buzz: The main character is played by Miles Teller, who broke out at last year’s Sundance with The Spectacular Now and is starring in this year’s That Awkward Moment and Divergence. This film pairs him with J.K. Simmons as the drumming instructor, making for one of the more promising comic duos we’ve heard of in a while.