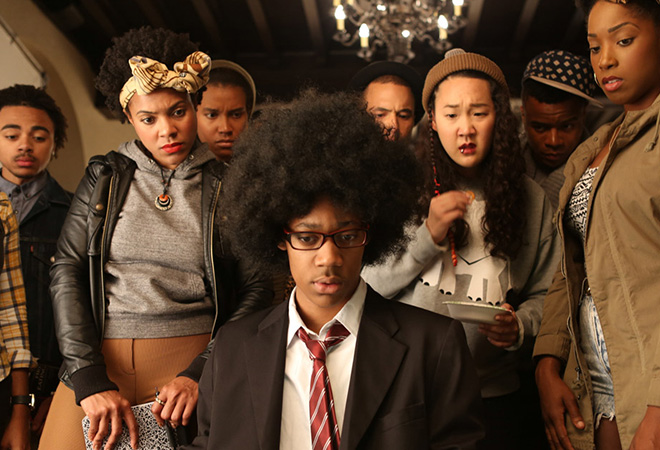 A still from Dear White People

As the 2014 Sundance Film Festival picks up speed, news starts flying faster about the acquisitions of various films. At the fest’s midway point, some titles have been sold to studios (Wish I Was Here, Dinosaur 13) while others are still looking for homes. So far, the quality of the films has been solid though we have yet to encounter as many amazing movies as we saw last year; but we’ve also seen fewer bad movies. But there are still four days to go.

The Double
As a man living and working in a dystopian city Jesse Eisenberg finds his life taken over by a villainous doppelganger. Eisenberg works well in both roles, which unspool like the two variations on his usual filmic persona: meek, fast-talking geek vs. aggressive, fast-talking jerk. The brilliantly shot and edited movie has a spectacular atmosphere and explores the nature of identity with intelligence, humor, and a little bit of suspense.

We Come As Friends
A documentary about the various international business interests that have sunk their claws into South Sudan, Hubert Sauper’s nightmarish travelogue paints a grim portrait of what it’s like to be a loser in the game of globalization. Extremely hard to watch but essential.

Dear White People
Black students at an Ivy League university struggle with the frustrations of institutionalized racism in a “post-racial” society. More than anything else, the film shows a lot of promise for writer/director Justin Simien and stars Tyler James Williams and Tessa Thompson. It would be great if more of that promise was fulfilled. The film is fine–sometimes funny, sometimes insightful, and game to push the audience’s buttons–but it’s too long and filled with dead air.

I Origins
A pair of biologists (Michael Pitt and Brit Marling) grapple with the philosophical questions raised by their enormous scientific discovery. Horribly pretentious and often unintentionally funny, the movie sets up a “science vs. faith” narrative that’s undone by a silly premise and sillier execution. It’s badly paced and unconvincingly acted.

Boyhood
Shot over the course of 12 years, filmmaker Richard Linklater’s latest film tracks the coming-of-age of a Texas boy (Ellar Coltrane), and the trials and tribulations of his family (Ethan Hawke as his father, Patricia Arquette as his mother, and Lorelei Linklater, the director’s daughter, as his sister). It’s light on narrative but heavy on emotion and startlingly accurate depictions of how people act. This is a story about time and how quickly it slips away. It’s also far and away the best film at the fest–so far.

The Babadook
In the most pleasant surprise of this year’s fest, a mother (Essie Davis) must protect her son from a supernatural being that’s now residing in their house. Rich with a spooky tone, this horror film from Australia knows how to scare. Davis’s performance is wrenching and unforgettable. The movie also builds a strong metaphor about the torments of single motherhood.

Laggies
Keira Knightley puts on an American accent to play an almost-30 woman who’s still mentally stuck in high school. The logical endpoint finds her hanging out with teenagers (including Chloë Grace Moretz) as she tries to straighten out her life. The nicely observed performances and sense of realism conflict with some lazy plotting.

Life Itself
A documentary about the late great movie critic Roger Ebert will give fans a lot to love. It’s chock-full of interesting and amusing anecdotes about his life, and his battle with cancer is tough but inspiring to watch. However, the film sometimes feels formless as it jumps between time periods at random. It’s also ultimately quite conventional, and director Steve James (Hoop Dreams, The Interrupters) is capable of much more.

Private Violence
This documentary attempts to answer the question of why women often don’t leave the men who abuse them. While following several people who work with battered woman, the film draws a harrowing picture of what it’s like to live in constant fear. Though structurally haphazard, it’s bursting with emotion as well as rage at a system that frequently fails victims.

Listen Up Philip
Jason Schwartzman plays a tremendously angry and unlikeable writer who’s trying to figure out how to be happy. It’s a good thing he’s so funny because this would otherwise be an unbearable experience (and some may indeed find his character too much to take). Lovely to look at and extraordinarily well-acted (Elisabeth Moss and Jonathan Pryce both kill), the movie is rough but rewarding.

Land Ho!
Two ex-brothers-in-law (Paul Eenhorn and Earl Lynn Nelson) go on a trip to Iceland. That’s all there is to the plot and yet the film is full of quiet but affecting details and character beats. It’s funny and ponderous in equal measure.

The Voices
Ryan Reynolds, in the best performance of his career thus far, plays a man who hears his pet dog and cat speaking to him. And the cat is urging him to kill. Things get grim but with a healthy dose of pitch-black comedy. Very, very few people will find this to their taste–there were numerous walk-outs in the screening we saw–but the film does such a good job balancing tones that it’s impossible to dismiss.