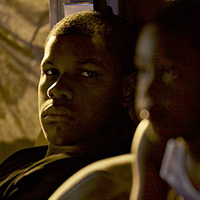 Sundance 2014 has come and gone. The agents, film buyers, reporters, and hangers-on have packed up and left Park City–until next year. Here are capsule reviews of 11 films we caught during the last few days of the fest and some assorted superlatives and statistics about this year’s festival intake.

Concerning Violence
Combining archival footage of Africa during the decolonization period and spoken excerpts from Frantz Fanon’s The Wretched of the Earth, this documentary examines the long-term effects of colonialism and how people can overcome them. An extremely challenging film, it is unafraid to confront the sins of Western culture head-on, suggesting that violence is a viable method of revolution. Gripping and brilliantly constructed.

Web Junkie
This doc follows several teenage boys sent to a Chinese treatment center for their supposed Internet addiction, but it fails to deliver on its intriguing premise. The film often feels formless and it doesn’t know what to make of the supposed phenomenon that it’s following.

The Raid 2: Berandal
An Indonesian cop goes undercover in a criminal organization in this sequel to 2012’s cult action hit. This one ups the ante in every way, featuring an expanded plot (the film is two and a half hours long) and much, much more gore and bone-breaking. The film is unbelievably dull whenever people aren’t hurting each other; fortunately, that’s not often. And they do it in such creative ways, all of which are filmed by director Gareth Evans’s assured hand. This is some of the average movie action in years.

Rich Hill
A slice-of-life about the daily trials of three boys growing up in the tiny town of Rich Hill, Missouri, the documentary’s gorgeous cinematography belies the sometimes grim details of its characters’ lives. Directors Tracy Droz Tragos and Andrew Droz Palermo (they’re cousins) capture the small but beautiful moments with grace and clarity. The simple but powerful film won the festival’s grand jury prize for U.S. documentaries.

Kumiko, the Treasure Hunter
A Japanese woman (Rinko Kikuchi) believes that Fargo is real and sets out for America to find the money Steve Buscemi’s character buries in the film. Despite the goofy premise, the movie manages to create remarkable empathy for its main character, a troubled woman at the end of her rope. It bounces between wry humor and reflective melancholy, never ruining its tone.

Freedom Summer
Produced by PBS, this documentary about the push to register black voters during the summer of 1964 should have a long life in classrooms all over the country. It’s informative and tackles a worthy subject but doesn’t do much to distinguish itself.

Imperial Dreams
Fresh out of prison, Bambi (John Boyega) tries to avoid falling back into crime as he readjusts to life in Watts. Much of director Malik Vitthal’s debut feature is predictable, though it avoids some of the cliches it could have fallen into. It’s helped by Boyega’s wonderful lead performance. The Brit makes a foolproof American as he conveys entire realms of emotion with his eyes. He makes the movie worthwhile.

All the Beautiful Things
In this experimental doc, two old friends reenact the night that they first reunited after many years estranged from one another. The conceit is mostly wasted as the movie wastes much of its time on uninteresting tangents. It might have worked better as a short film focused on the crux of their meeting, in which they discuss the incident that led to their falling out. As it is, the movie feels pretentious.

They Came Together
Amy Poehler and Paul Rudd star in this merciless spoof of romantic comedies. It has all the great absurd humor one would expect from the team that created Wet Hot American Summer, but much of it consists of one joke repeated endlessly and of characters winkingly reciting stock rom com dialogue. It’s tiresome and limits the movie from being more than fitfully funny.

Rudderless
Billy Crudup plays Sam, a former ad exec who spiraled into drunken grief after the death of his son, and now lives on a houseboat. With a local musician (Anton Yelchin), he starts playing the songs his son wrote and gradually emerges from his shell. Despite the standard indie film setup, the movie, which was directed by actor William H. Macy, won us over. Crudup and Yelchin are both great, the music is nice, and it hits more than a few of the emotions it aims for even if it misses others.

Blind
This Norwegian import follows a recently blinded woman (Ellen Dorrit Petersen) as she spends her days cooped up in her apartment, writing stories and refusing to venture into the world. The film does a magnificent job of portraying the unusual way its lead “sees” the world, laying bare the subjectivity and uncertainty of our senses. It’s a raw exploration of the ways we work through grief and confront doubt about the future.

Special Award for the Best Performance by an Animal – Bunzo the rabbit in Kumiko, the Treasure Hunter

Sundance NEXT Fest Tunes Up for a Musical Weekend