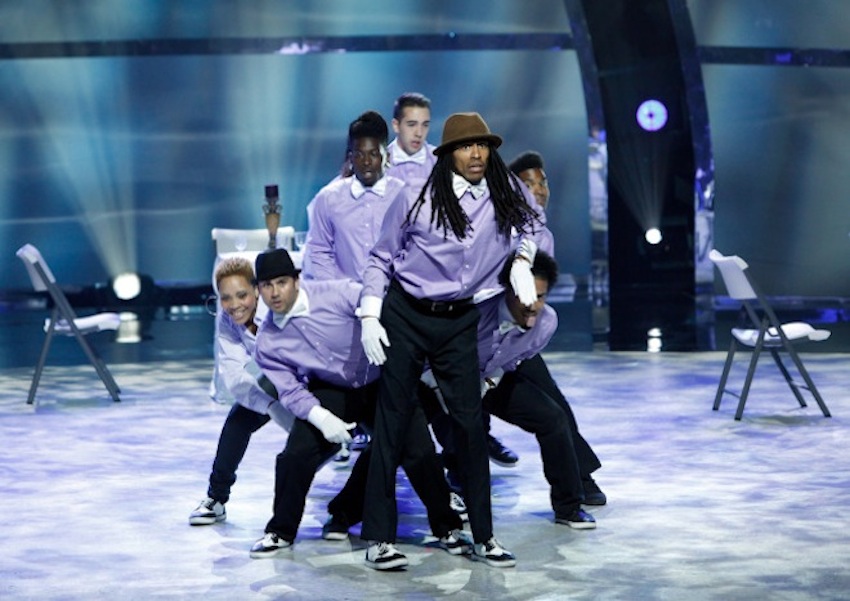 How did you like this all Michael Jackson episode of So You Think You Can Dance, city kids? The show pulls out old hits and new for a special evening promoting the King of Pop’s new single and video, “A Place with No Name” (apparently the group America was honored that MJ used their song “A Horse with No Name”). We even see a group dance number set to the song and choreographed by MJ’s choreographer, Travis Payne; it features the Top 8 with purple hair doing isolated movements in shiny silver outfits.

Cat Deeley, sporting an adorable updo bob, introduces the judges: Nigel, Mary, and guest Jenna Dewan Tatum, who is presented as a former dancer but does some (very ‘70s-looking) dancing in her show, Witches of East End, directed by SYTYCD’s Debbie Allen. Then Cat informs us that all the dancers will be doing solos tonight, and Tanisha starts it off with an athletic, gymnastics-heavy routine.

Ricky starts the duets with all-star Jaimie from season 3, doing a Travis Wall contemporary number. From the opening movements to the sweet ending, it’s a lovely nod to the Tramp himself, Charlie Chaplin, who wrote the tune “Smile” for his film Modern Times. The judges love Ricky and the routine, and Cat informs us that he’s safe. Natch.

Zack dances an amazing, non-stop tap solo with free but controlled slides before Valerie and “resident ballroom beefcake” (as Cat calls him) Ryan take the stage for a Jean Marc Genereux samba. What an outfit she’s wearing! Va va voom! The bright, vivacious dancer (whose teacher is just as adorable and life-affirming as Valerie) looks mature and sexy while showing her love of dance. The routine starts slowly but picks up energy and gets better as it goes. The straight samba runs are similar enough to the samba rolls that they almost seem like a mistake, except for the way they show the roots of the Maxixe, the 1914 ballroom dance that developed into the samba. When Valerie and Ryan get to the samba rolls, they’re clean and effortless. Happily and unsurprisingly Valerie is also safe.

After Casey and Rudy both perform impressive solos, Casey returns for his hip-hop duet with all-star Comfort, choreographed by Pharside and Phoenix. The fun routine has a bit too much theatricality and not enough content, but the theme is cool. Casey starts the routine literally trapped in Comfort’s huge spider web, trying to avoid her evil kiss; he fails. He succeeds at the dance, though Nigel warns him to get down more, and tells him to continue to grow. Cat also reveals that Casey is in the bottom, again. Will his number finally be up?

It’s so lovely to have a classical ballerina on the show, and Jacque demonstrates this with her effortless pointe solo. Afterward, Tanisha and season 1 winner Nick dance a Stacey Tookey contemporary to the classic MJ tune “She’s Out of My Life.” It’s wonderful to see Nick again, and Tanisha matches his talent, though Nigel warns her that she needs to show her vulnerability as much as her strength, an interesting point. She doesn’t even look vulnerable when Cat tells her she’s in jeopardy.

Speaking of vulnerability, Jessica’s solo expresses exactly that; a refreshing change from her usual sex-kitten routine though she does some of the same moves. Rudy and all-star Allison follow with a Ray Leeper routine about obsession to “Dirty Diana,” which Michael Jackson apparently wrote about an aggressive groupie (gonna need to take a closer look at those lyrics). Allison is such a powerhouse that it’s near impossible not to watch her. The judges love it, and love Rudy in it, but we feel he could have given more to reach her level. Leeper also could have given him more to do. Sadly, Rudy is also in the bottom.

The two tappers are again back to back. Adorable Valerie does a clean, fast-moving tap solo and Zack follows with his Spencer Liff Broadway number performed with last season’s Makenzie. Zack is so smooth and sexy as a hip New York city slicker trying to impress Makenzie’s fresh-off-the-bus transplant. He has gorgeous lines and great energy, even when the movements feel slow to MJ’s terrific “The Way You Make Me Feel” (which makes a great soundtrack for West Coast Swing, by the way). The song doesn’t overpower the dancing, a tough feat when you’re itching to sing along. Nigel says Zack has surprised us all with how good he is, but that’s at least partially because they barely showed him during the auditions. Not that that’s a bad thing. With the bottom two dancers already revealed, Zack knows that he’s safe; even better, he’ll be dancing with all-star Fik-Shun next week. That should be good.

Ricky, first for duets, is the last for solos. He doesn’t disappoint. He’s as beautiful, expressive, flexible, and strong as ever. Jacque and Twitch follow with a Dave Scott hip-hop routine that seems to have more of a theme than they mention; the stage, looking like tragedy struck, is strewn with garbage, and the dancers hug before starting the routine. Jacque has a tough job, because classical ballet and hip-hop could not be more different: The former is straight, pulled up, and aesthetically still with the torso mostly moving as one. The latter is low, into the ground, and uses all parts of the body (hips, ribcage, shoulders) independently. Jacque does it well, though she could’ve gotten a little lower. The judges love her, but the voters say she’s in danger of going home.

It’s exciting to see all-star Will back on our screen. He’s so dynamic, it’s almost impossible not to watch him, which means Jessica needs to work harder to match him in Mandy Moore‘s humankind vs. earth contemporary routine. She does well and the judges love her, thinking again that she could take the whole competition. More importantly, she’s safe.

Now that the duets are completed, the third winning dance crew from earlier in the season is here to perform. Control Freakz is outstanding. The subtle lighting, their unison popping and animation to the cool French music from Amélie makes it look like we’re witnessing a five-cent kinetoscope film.

The moment of doom is upon us. As Rudy, Casey, Tanisha, and Jacque await their fate, the waterworks have already started. We thought Casey’s time was finally up after three times in the bottom, the most of any contestant, but no. Surprisingly, it’s Rudy along with his partner Tanisha. So much for his budding romance with Jacque, at least as far as the show is concerned. Jacque, the unknown ballerina who at the start couldn’t be told apart from Jourdan, has survived while powerhouse Tanisha goes home. What’s also interesting, this is the third consecutive week where partners were eliminated together. Poor Rudy is an absolute wreck, crying uncontrollably while Tanisha is very matter of fact about her departure. From his safety box Zack also weeps for Rudy while Rudy tries in vain to pull himself together. Poor boy.

What did you think, city kids? Did you enjoy all the Michael Jackson tributes, not to mention the sneak of his new video? Are you surprised to see Casey and Jacque survive another week while Rudy and Tanisha are sent packing? Which pairing are you excited to see dance next week?