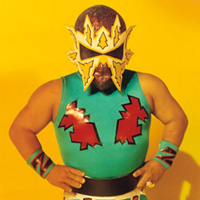 As I photographed the Crazy Chickens double attack the massive Shamu Jr. with simultaneous kicks to the face, I had a vision of my own mortality. Since 2006, I’ve been photographing Lucha VaVoom. A beautiful mutation of the sexo of burlesque shows and the violencia of Mexican wrestling, it has become an L.A. institution complete with masked warriors and buxom, shimmying go-go dancers. It’s a Technicolor superhero orgy where good battles evil and the sexy tangles with the ugly as a frenzied crowd screams for mas, mas, mas! The cast of characters is as complicated–and as dramatic–as a Mexican soap opera. Heroes (clad in acid-flashback Power Ranger getups) fight evildoers (aka rudos) as exoticos (fabulous ones) and buxoticas (naked ones) fill out this psychedelic skeleton.

Jammed against the stage, I dodged Cassandro, the exotico who recently celebrated his 25th anniversary of wrestling, leapt headlong into the audience. (On Facebook you can witness his physical struggles with his artform as broken bones and frequent hospital visits will attest.) As the sparkly human torpedo flew past, I remembered the Lucha VaVOOM shows I’d photographed in the past.

At my first Lucha, I accidentally wandered backstage into the dressing rooms and met an off-duty stripper from Jumbo’s Clown Room who was hurrying to get into a costume that she would remove onstage in a few moments. Nearly naked “minis,” the little people wrestlers, were stretching and practicing high kicks, most of which were intended for the groins of their larger opponents. I recalled identical twins Bibi and Fifi Poubelle tackling oversized wrestlers dressed as naughty nurses. Over the years, I have seen Dirty Sanchez perform his signature move, the pants-down bare-butt-to-face smash, at least 40 times–and it never gets old.

It seems like every Hollywood-adjacent bar has a themed burlesque show these days, but Lucha VaVOOM is still the original and still does it the best. There’s something supremely satisfying about witnessing a man in spandex jump from a balcony to punch another man in the face. In the real world, we don’t get to jump-punch the editor who killed your story or the parking lot attendant who lets an SUV cut in front  of you. All that pent-up frustration has to go somewhere; maybe the best thing to do is release it as El Chupacabra bodyslams one of the Crazy Chickens into a folding chair. It’s the Tao of Lucha: Sometimes you’re the bodyslammer and sometimes you get bodyslammed. Either way, you still have to get into the ring.