Home Uncategorized Singing Songs in the Key of L.A. 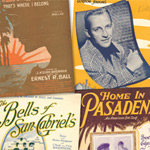 The golden age of vaudeville has long been a New York story—until now. “Songs in the Key of L.A.,” a project spearheaded by USC professor Josh Kun, gives our city some credit for the vivacious music. Sifting through the Central Library’s 50,000-item sheet music collection, Kun and his students culled hundreds of songs from the 1840s through the 1950s that had a local connection.

Among them is 1913’s “I Love You, California,” written by lyricist Francis Bernard Silverwood, who founded the downtown department store Silverwoods. It’s the state’s official song, and the title illustration—a grizzly bear hugging California—appears on the cover of surf band Best Coast’s latest album, The Only Place.

Silverwood’s ditty and about 100 other pieces have been collected in a new book (also called Songs in the Key of L.A.), which features essays by musicians Van Dyke Parks and Stew of the Negro Problem. The multimedia endeavor includes five recordings of vintage songs by current bands and, in August, a free outdoor concert at California Plaza with Ozomatli interpreting some old tunes. “While archives are important purely as preservation,” Kun says, “I think their real value is in how they’re used by people and given new meanings.”

I’m Goin Back to California That’s Where I Belong

I Love You California

Long Beach by the Sea