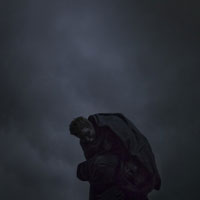 If you hear Will Wiesenfeld’s newest LP immediately after listening to his debut album, you might convince yourself that the electronic-pop wonk behind the L.A. band Baths is a manic-depressive. Though it’s a jarring transition from the peppy, emoticon-pop of 2010’s Cerulean to the languorous, morbid tracks on his sophomore album Obsidian, Wiesenfeld is a bubbly conversationalist who seems exceedingly well-adjusted. We chatted with Wiesenfeld about his excellent yet depressing new album, his months-long bout with E Coli, why Sawtelle Blvd. is his jam, and what songs he could dance to for eternity. Obsidian is out now via Anticon, and you can currently catch Baths on his North American tour.

What has life been like since the release of your debut album three years ago?
I got really, really sick with E Coli for upwards of like three months and I was bedridden. It was terrible. I wasn’t totally bedridden: I was moving from my bed to the couch to the toilet. After all that shit happened, I needed eight or nine months of recovery. It was the worst thing ever. There is never a good time for that to happen, but I was right on the precipice of trying to start new material. Only once I simmered out of having that illness did I get back in the swing of things and start working on the record.

Obsisian is way darker than your last album. Was that intentional?
It was extremely intentional. I am trying to make a big effort to get across that I didn’t get sick and then make a dark record; it’s not like that at all. I started working on the material before any of that stuff happened, so it was like four years ago. My favorite music is very sad music, so I wanted to try to make something like that and that is what this record is. I knew that I didn’t want the darker material to be the first thing that people heard, and I wanted to have a larger audience for it, so I put it on the back burner to make a more digestible record the first time. Now I feel more comfortable coming to a wide audience with something like this. I am not that person at all, so I had to work really hard to get into that headspace. It took a lot of pushing to write lyrics that were more depressing, in a minor key, and sad.

How do you get into that headspace since it is so unnatural for you?
There is a lot of artwork, film, and music that I consumed, and I made an effort to evaluate stuff like that for a longer period of time than I would normally. One of the biggest influences was the band Azeda Booth; they do a lot of extremely melodic, interesting pop music. When I say pop, I don’t mean traditional pop at all; it is very experimental. But their lyrics are super dark, bleak, and arresting. I think it became this bible for what I wanted to do emotionally.

Where do you live in L.A.?
I am currently in Canoga Park.
What’s your least favorite part of LA?
Probably Canoga Park. I live in an industrial wasteland. On the opposite end of that, Sawtelle is my favorite district of L.A.

Do you have a favorite restaurant around there?
I think the magic of Sawtelle is that I don’t have one. I can go for whatever. I eat at Nong La a lot, which is a Vietnamese place. But the thing that I do every time, no matter what, is go to Volcano Tea. All I do online is look for good Boba, and it is the only place that has the formula for making perfect milk tea. It is always perfect, which is why there is always a long line at that place. It’s the best.

If you had to dance to one song for the rest of your life what would it be?
Can I say two? “Walking On A Dream” by Empire of the Sun or “Hang With Me” by Robyn.