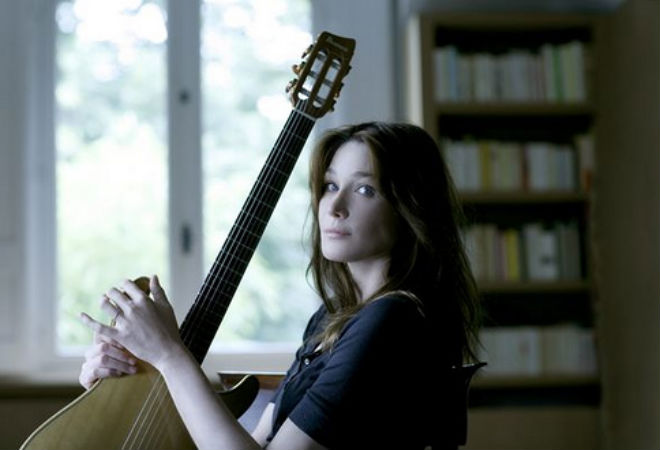 This Saturday, singer-songwriter, model, and former First Lady of France Carla Bruni will perform at the Luckman Theatre for one of only two American shows on her current tour. Bruni has been well known in the fashion world since the late ’80s, when her debut in a Guess jeans campaign launched her modeling career. She has sported Versace, Gucci, Yves Saint-Laurent, and Christian Dior on runways across the world. But when, in 2008, Bruni married Nicolas Sarkozy (then president of France), after having known him for only a few months, she became a public figure of a different sort. Her official responsibilities forced her to put the music career she had been building since her 2003 debut album, Quelqu’un m’a dit, on hold. With the 2013 release of Bruni’s latest album, Little French Songs, the chanteuse is ready to move audiences with her intimate and romantic chansons.

How did you become interested in music?
Both of my parents are musicians. Growing up, everyone in my family would play music. When we were kids, music was all over the house. My parents were constantly playing. When they weren’t playing music they were listening to music. It was like a member of our family.

When did you start writing music?
I started writing poetry when I was quite young. I played the piano and violin as a child. When I was around 10 or 11, someone gave me a guitar and that’s when it really started. The piano and the violin are beautiful and magnificent instruments but I never learned how to write music for either of them. When I started playing guitar, music writing really became a part of my life. I never dared to sing and play in front of people but I would do it on my own for hours on end.

What kind of music were you inspired by?
My parents taught me to listen to classical music, but I’m influenced by all kinds of music. Of course Chanson Française performers like Serge Gainsbourg and Jacques Brel but also a lot of Bob Dylan, Leonard Cohen, and Billie Holiday. I listen to country, too. I really like Emmylou Harris. It’s a mix of incredible and different people.

When did you know that you wanted to do more with your music?
After I graduated high school I became a model. My dream was really to do music at the time, but I wanted to be free and independent and modeling helped me achieve that. I also wanted to travel and see the world. Modeling is great for that. I went to Los Angeles many, many times. I went to Africa, Russia, Japan, and China. I loved it. When I ended my modeling career I had a suitcase full of lyrics and melodies.

Were you writing songs while you worked as a model?
Yes. It was very inspiring to work as a model. I was always free. I saw new things, met new people. I had a great stock of memories, which is good for writing. Songs always come from a mix of emotion and memories.

Where do your ideas for songs come from?
I can never really figure that out. I sit with my guitar and I wait for songs to come to me. Then I write and write. Sometimes it’s bad, sometimes it’s good. That’s how I ended up doing all four of my albums.

I write romantic music. I have no choice. Every time I try to write a different kind of song it’s horrible. I’m only good with lost love, or upcoming love or desperate love, etc. I have a tendency towards romanticism in my songs.

Your 2007 album No Promises features lyrics inspired by the works of poets Emily Dickinson and W.B. Yeats. Where did the idea for that album come from?
I was trying to find inspiration for an album by reading poetry. I ended up having a very personal relationship with those poets because I dived into their works and swam in them for a year. Reading the words of genius people is always inspiring. I ended up falling in love with some of those poems I read and some of them I just put music to as easy as that. A lot of people didn’t agree with that, but I don’t care. I loved it.

Do you prefer performing to recording or vice versa?
I love performing. I love the power of it, but I’m not too crazy about touring. Sometimes it makes you wish that you were twenty years old again. It’s not very practical when you have kids, which is why I prefer recording at the moment. My daughter is two-and-a-half years old and my son is 12. I miss them terribly when I’m on tour and I get sad when I’m without them. Thankfully I’m bringing my daughter with me when we go to California this week.

The good thing about music is that I can work on it at night. It was more difficult a few years ago when my husband was president. Now that he no longer is, it’s much easier to find time. I can do as much as I want with it. I don’t have any official duties to fulfill.

Did becoming the First Lady of France impact you as an artist?
It had a great impact on me personally, but I tried to not let it impact my songs. It had a greater impact on how people listened to my music, I think. It didn’t really impact my relationship to my husband. I was 39 when we met and 40 when we were married, so it didn’t really change who I was, except that he made me very happy. The place I was writing my songs from, my soul, didn’t change. What changed was the way people took my music. They took it bad! They didn’t like it. When I say people, I mean the media. It’s hard to mix music and politics.

Did you find inspiration in that?
It inspired me a lot because I had restrictions. I had less time to work on my music and people expected me to only take care of the position I was in. There are a lot of things you can do to help others when you’re in that position. You can help a lot of people when you’re married to the President.

Was that a sacrifice in terms of your music career?
After my third album was released [in July of 2008, five months after Bruni had married Nicolas Sarkozy] I said to myself, I’m going to focus on using my position to help people in any way I can, and I’ll write my music at night. It wasn’t a sacrifice. It was a choice.

Is your husband involved in your songwriting process in any way?
Yes, poor him! He has to listen to all of it. Sometimes he yawns.

Really?
No, he loves music. He loves French music, but also Elvis and Frank Sinatra. I like to hear his opinion on my songs, whether he likes something or not. He doesn’t give me detailed advice, but I can read it in his face if he likes a song or not. He’ll stop moving if he doesn’t. He’s very receptive to music.

Is there anything you’d like to do as musician that you haven’t done yet?
I really want to do a concert by myself where I sing a cappella. I haven’t done that before. I have many different little dreams for my performances. I’ve always wanted to perform a concert in the dark. I don’t know why. It’s probably impossible. Everyone has a phone that lights up now and you can’t turn off the Fire Exit signs in a concert hall. I’d love to just switch off the light and sing a song for people.