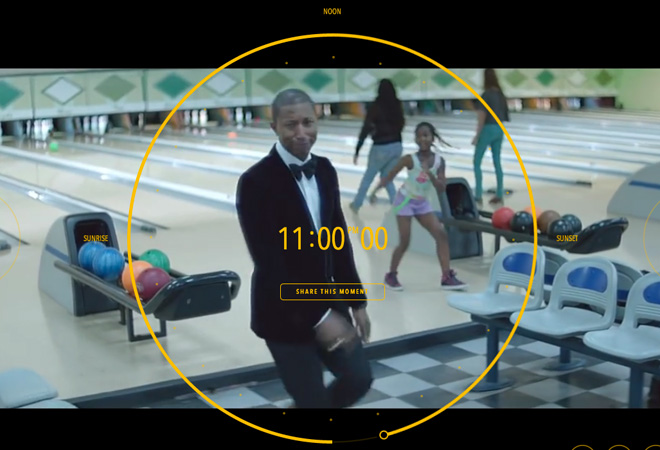 WHAT: Imagine a world—or at least a city—where people are so enthused they’re dancing in the streets. Pharrell Williams did. He transformed the idea into a 24-hour music video for his buoyant new single “Happy.”

Released last Thursday at midnight via a microsite (you can also see part of it on YouTube), the interactive clip combines footage of ordinary civilians—and a few celebs—dancing all over Los Angeles at all hours of the day and night.

At 5:36 a.m. you’ll spot Magic Johnson getting funky in his trophy room. At 1:48 p.m. you can catch the Odd Future crew doing jazz hands. At 5:28 p.m. check out Jamie Foxx grooving with his daughters. Don’t worry, you don’t have to watch all 24 hours of the video—though someone at Pitchfork did. An onscreen controller allows you to jump to any moment in the clip. Flip around and you’ll catch Jimmy Kimmel, Steve Carrell, and Kelly Osbourne, among others.

You can also toggle to a simultaneous visual track of Pharrell, who remains perpetually suave even as he dances in the wee hours of the morning. It’s the über-talented singer and producer’s vision, energy, and joie de vivre that drive this video.

The other star of the show is Los Angeles. In addition to Hollywood Boulevard, Union Station, Runyon Canyon, and the bridges of downtown L.A., you’ll notice less instantly recognizable locales like Handsome Coffee Roasters in the Arts District and All Star Lanes in Eagle Rock. The latter is the backdrop for one of the video’s best moments: an 11 p.m. bowling alley dance-off between tuxedo-clad Pharrell and a little girl. “Happy” is a perfect opportunity for Angelenos to play “spot that location,” but it’s more than that. It’s a poetic visual history of Los Angeles, circa 2013.

VERDICT: Brilliant. A few weeks ago we dubbed “City of Angels,” Jared Leto’s 11-minute visual ode to Los Angeles, “the ultimate L.A. music video.” We stand corrected. Pharrell managed to top Leto—not that it’s a competition. Seriously, has someone leaked something into the water? This fall, we’ve seen a handful of awesome interactive videos, from a multi-channel, lip-syncing rendition of Bob Dylan’s “Like a Rolling Stone” to Arcade Fire’s “Just a Reflektor” that allows users can control the video via smartphone. Admittedly, we’re biased because of its Los Angeles setting, but we think Pharrell’s “Happy” outdoes them all—seamlessly weaving together technological innovation, creative vision, and pure fun to create one of the best visual treats of the year.  So forget your troubles, c’mon get “Happy.”