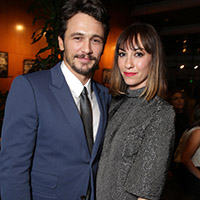 Last night Gia Coppola, Tribeca Film and Farfetch premiered her new flick Palo Alto—based on James Franco’s book of short stories—at the DGA. The prem was packed with family and friends and followed many fine Coppola traditions. Here are a few:

Make an interesting film: I liked the flick. It is dark and light at the same time and is set to great music. You can’t take your eyes off Emma Roberts (good girl, but not too good, trying to make her way) and James Franco makes you cringe as a soccer coach/lech. Jack Kilmer (Pops is Val) makes his film debut and also shines as Teddy—you find yourself hoping he picks the right road. Nat Wolff gets the updated Sal Mineo Rebel Without a Cause role just right – even while wearing a red James Dean-esque jacket in the end.

After-party at the Chateau Marmont: After the credits rolled, guests drove a handful of blocks to the Chateau Marmont for a party in the Penthouse. Auntie Sofia has also had many a prem party at the Chateau. My fave was for Marie Antoinette. This latest ‘do had DJ Myles Hendrik spinning terrific music, wee pigs in a blanket, cocktails and lobster rolls. Star Emma Roberts smoked cigarettes (among other things) onscreen and kept it up (cigarettes anyway) at the after-do, blowing smoke off the balcony high above Sunset Blvd.

Debut your own wine: Coppola also debuted her new wine—Gia by Gia Coppola at the Chateau fete—all are light and delish. Auntie Sofia did the same a few years earlier, introducing her rose at a bash. It’s a nice touch.