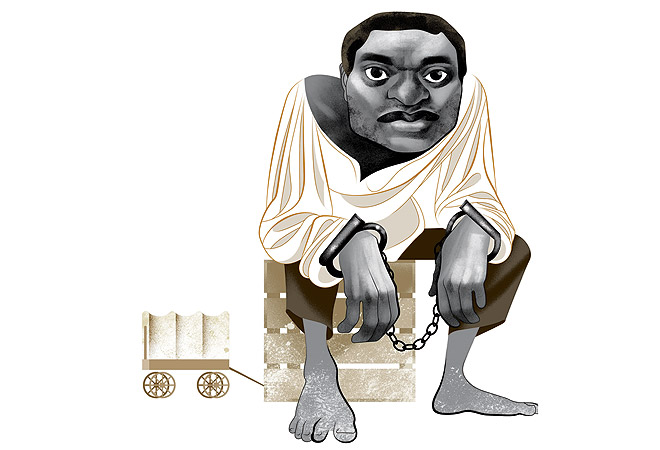 The most relentless portrait of American slavery since television’s Roots 36 years ago, 12 Years a Slave tells the true story of Solomon Northup, on whose 1853 autobiography the movie is based. Born and raised a free black man in the North before the Civil War, Northup was kidnapped, ripped from his family, and sold into bondage for more than a decade before he was able, by chance, to prove his identity and free status. Passed from one master to the next and determined to survive, advised by his fellow slaves to keep secret the intellect and education that would only be perceived as a threat, Northup finally accepted another name bestowed on him by those who owned him; 12 Years a Slave, then, isn’t just the story of servitude imposed by the white race on the black but how the institution of slavery intended nothing less than the nullification of identity. Worse than his deprivation of freedom, perhaps worse than the lashes inflicted by his masters, perhaps worse still than the lashes he’s compelled under threat of death to administer to other slaves, Northup’s sense of self fades with time as he begins to forget who he is or who he ever has been. The only thing that overpowers his captivity are the memories of his wife and children.

By the same token this movie is for an America that would forget what it has been. Slavery was the betrayal of the American Promise at the moment that promise was made. Nothing manifests more persuasively the American contradiction than that the author of the Declaration of Independence, a slave owner, wrote an antislavery clause into the document—as if to compel himself to be better than he was—which then had to be edited out so the Southern states, including Thomas Jefferson’s own, would sign it. America has been trying to reconcile the promise and its betrayal since before it was America, and it’s been a theme of American movies since anyone began calling them movies. Cinema first laid claim to being art with 1915’s The Birth of a Nation (“like writing history with lightning,” President Woodrow Wilson said famously), dramatically and technically such a quantum leap from what had preceded it as to have breached some space-time continuum in the movie universe. Climaxing with a thundering and heroic ride by the Ku Klux Klan, Nation also was so bred-in-the-bones racist that Southern director (and Confederate colonel’s son) D.W. Griffith was genuinely startled by the accusations that followed. He spent the rest of his career trying to offer amends with the subsequent Intolerance and Abraham Lincoln. Though it wasn’t even the best movie of its year, Academy Award behemoth Gone with the Wind nearly a quarter century later was considered by audiences and some critics the apex of Hollywood, with its yearning for a fairy tale antebellum South of knights and ladies, masters and mammies.

Thus two epics towering over the first generation of American movies set a tone for how Our popular culture has dealt with what Lincoln called the “scourge” for which “every drop of blood drawn with the lash shall be paid by another drawn with the sword.” Now in an ostensibly enlightened age, when Americans make a movie about slavery it’s called, if not Gone with the Wind, then Lincoln, which isn’t to put down Steven Spielberg’s fine biopic of last year but to suggest that the only way we bring ourselves to deal with the stain of slavery’s two-and-a-half centuries is by displaying our nobler efforts to overcome it. Since Lincoln, the rash of films in which the core concern is slavery or racism—usually but not always on our own shores—has been conspicuous. Django Unchained, 42, Fruitvale Station, The Butler, the upcoming Mandela, and next year’s Belle are pictures of variable virtues marked by strong performances; it’s entirely possible to foresee three black actors (The Butler’s Forest Whitaker, Mandela’s Idris Elba, 12 Years’ Chiwetel Ejiofor) vying for this year’s Oscar. Most are conventional pictures, less concerned with media-conscious dazzlement than with telling important, straightforward stories, which is probably to their benefit when dealing with a subject that can never be palatable enough for some. Most or maybe all would be difficult to imagine in an era that wasn’t already distinguished by the first African American in the Oval Office, when only the cynical challenge the national accomplishment of electing a black president and only the naive fail to realize what remains unfulfilled.

A lot of the same people whose reflexive response to the very fact of Barack Obama is to dispute whether he’s even an American also use his presidency to absolve the country of its past. White Americans believe we’ve made more progress since the end of slavery in 1865 than do black Americans for whom 12 Years a Slave documents a collective memory, passed down in the genes and by the lore of generations. Given the current ideological wars, someone invariably will question the veracity of this or that detail in 12 Years a Slave—so as to discount the authenticity of a broader record whose depiction should be incontestable—as well as the agenda of a filmmaker and actors who are largely foreign: British director Steve McQueen, the Anglo-Nigerian Ejiofor, Kenyan Lupita Nyong’o as a doomed slavewoman, Englishman Benedict Cumberbatch and the German-Irish Michael Fassbender as plantation owners, and as the film’s singularly passionate antislavery voice, coproducer Brad Pitt, from Missouri himself but playing, rather pointedly, a Canadian. One anticipates an argument turned on its head, which is that a fundamentally American story is somehow less American because Americans are unwilling or unable to tell it themselves.

The predictable resistance to 12 Years a Slave will only be compounded by its disinclination to cut the audience slack. Director McQueen doesn’t do slack; as evidenced by his previous films Hunger and Shame, he tends to the tonally remote, capable of directorial intimacy only when he’s at his least compromising. “Brutal” and all of its variants will be the most overused word in discussing this picture, and strong buzz on the film’s behalf almost certainly will be offset by unease over the movie’s violence, even among segments of the audience not similarly dissuaded by, say, the exuberant floggings in Mel Gibson’s The Passion of the Christ. McQueen had the good judgment to cast Ejiofor, an actor who has seemed incapable of a dishonest word or gesture in roles large and small (Dirty Pretty Things, Children of Men, American Gangster) and who gives the picture a pathos it wouldn’t otherwise have. The larger point is that a less pitiless film would be bankrupt. The beautifully composed imagery of 12 Years a Slave underscores the savagery of its subject, which is an American South not of knights and ladies but obscene values and a grotesque pageantry, every gorgeous shot of the languid landscape radiating toxicity like a hyperlush blossom that’s poison to the touch. Though its path to the Academy Award is strewn with our dismayed sensibilities, this looms as the picture of the year anyway, greatness being equal parts an urgency beyond resisting and a moment that’s exquisitely timed between the never too soon and the nearly too late.