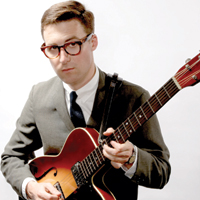 Nick Waterhouse isn’t old, but he is old school. For his debut album out this month, Time’s All Gone, the 25-year-old Echo Park resident takes a quick trip in the way-back machine, dishing out clean-cut garage pop. It’s living room rock tailor-made for twisting and shouting by the light of a cathode-ray TV. Waterhouse imagines a world where pop music stopped in 1967, populating it with skronking saxophones, backup doo-wops, and swinging beats. He is a student of midcentury rock, ravenously collecting 45s from the “Wall of Sound” era. His self-released single goes for upwards of $300 among online collectors who crave a vinyl slice of his jukebox jams. Catch him May 10 at the Center for the Arts in Eagle Rock, getting gritty while looking sharp.