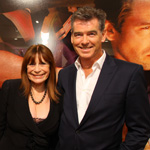 Last night, Pierce Brosnan invited me to dinner… on behalf of photographer Nancy Ellison and in honor of the opening night of her…gulp…retrospective, Altered Egos. As I drove to the Pacific Design Center I was considering who is actually my favorite Bond and what was in store for the evening. The PDC was crawling with folks there for MOCA and Westweek but I finally found the show by the smell of Wolfgang Puck’s salmon pizza. When I walked in I caught my breath. Pics of celebs from the ‘70s—‘90s stared back at me. There were also snaps of the Clintons from early 2000. Surreally, there was the real Rosanna Arquette looking at an enormous picture of herself taken decades earlier. Host Brosnan was cackling over a snap of himself cradling his first son (who he later said was just four months old at the time).  As I walked around holding a cone of tuna tartar, I spied Dyan Cannon and Sally Kellerman and wondered how popular the doctor’s offices on Spalding must be. All were being good sports looking at nearly naked moments captured in time on white walls.

Around 8ish, Brosnan and his wife Keely led the group down to Wolfgang Puck’s restaurant for a small dinner. Pianist Lola Astanova (the most dressed up lady in the room) swanned over to the Steinway and dramatically played some Liszt and Rachmaninoff. Brosnan got up after Ellison’s husband Bill Rollnick and PDC owner Charles Cohen to say a few words “Thirty years ago Nancy shot me, I was figuratively just off the boat from London and had a new baby tucked under my arm,” he said. “We knew the game and got the joke.” They have been friends ever since as she has with many of her photo subjects. I was sitting by another of her models, Jacqueline Bisset, who made me eat the blackberries on my almond cake (something about antioxidants). Whatever she’s doing it is working, so I popped two of them in my mouth.

Check out Altered Egos at the PDC. The pictures are full of joy (and chest hair) and worth a look.  The show is free and runs from March 19—June 1.