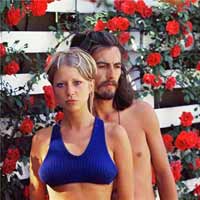 Pattie Boyd will live forever, immortalized in some of the greatest rock classics. Discovered in the 1960s, the former Vogue model became a mythical muse, a modern day Helen of Troy who captivated and inspired both George Harrison and Eric Clapton. With her large almond eyes, full pout, and golden bangs, she was the face of the 1960s—a beauty that’s conjured by the sound of Harrison’s “Something” and “I Need You” and Clapton’s “Layla” and “Wonderful Tonight.”

Now, Boyd is immortalizing the men she inspired. Her latest photography exhibition, Pattie Boyd: Newly Discovered, opens today at L.A.’s Morrison Hotel Gallery. It’s a collection of never-before-seen photographs that offer an intimate glimpse into her life with the British music legends. Taken from her private archives, the zeitgeist of the ’60s permeates Boyd’s prints and Polaroids. We spoke with Boyd about her relationship with the camera and how she found herself behind the lens.

When did you first discover that you had an eye for photography?
I think probably not until somebody saw some of my photographs in England and wondered if I would enjoy having an exhibition. I panicked and said no because I didn’t think I had enough photographs, and I didn’t think any were worth looking at or exhibiting. It wasn’t until I had my first exhibition, which was in fact in San Francisco, that I realized that my photographs were okay after all. It’s very difficult to see your own work.

As a model you worked with some of the greatest photographers in London, such as David Bailey and Terence Donovan. How did they influence your work?
Bailey in particular told me what to look for when you’re looking through the lens of a camera. He told me to look for angles and also light, and I think the angle thing was really the most important thing for him to capture an image.

You’re experienced with being in front of the lens and behind it. Which do you prefer?
I much prefer being behind the camera. I take photographs of anything: flowers, children, people. I just love taking photographs. I like to capture what I see. I can look at somebody or something, even if it’s an object, and because of the light on it, I just need to capture it. As a model you don’t really realize that, because it’s all being done and created around you. Particularly if you’re in a studio and then you don’t know what the lighting is like because, you know, you had no input. As a photographer you can just create everything. If I’m photographing an actor for example, then I like to light him or her in the way that I think is best.

You’re one of the most iconic muses of all time. Who have your muses been?
I really love the old classic photographers. I constantly like to look at Henri Cartier-Bresson and Bailey Donovan and a lot of American photographers and French photographers.

What was it like being thrust into the heart of Beatlemania?
The thing is that I wasn’t really in the center of things when they were touring because I never went on tour with them. I think that would have been quite terrifying. Me and the other girlfriends were not allowed to go on those tours because they were so worried about security. But otherwise, normal life would go on. We would go out together as a group. We’d go to clubs and screenings and parties, and we’d always be together. We weren’t in situations where there would be a lot of fans. I thought I was living a normal life. With time I realized that perhaps I wasn’t living a normal life because we were very clearly in this wonderfully protected bubble.

Why do you think the 1960s have remained so influential? What was it like to be in the thick of it?
I think the ‘60s were pretty cool. It was the most exciting time because it was like a revolution of new artists that came to the foreground in cinematography, painting, sculpture, art, and photography. It was a creative explosion. I know it’s because towards the end of the Second World War, England especially and the rest of Europe was left in a sort of devastation. It took a long time for all the countries to gradually build themselves back up. Then our generation emerged and we wanted to have something new—a new explosion to get away from the sadness and misery that the war had caused so many families. Also there was a slight rebelliousness against the old guards, which has to happen and did happen and it was a good thing it did happen. I don’t know what people rebel against these days.

You obviously had a profound impact on their music, but how did the Beatles and Eric Clapton influence you?
Eric influenced me by encouraging me to listen to blues records that greatly influenced him, like Big Bill Broonzy and all those classic blues players. George really influenced my music by encouraging me to listen to a different range of things. I didn’t grow up with a lot of music in my family, so this was a wonderful new area to explore, and I had the best teachers.

At the time you took these photos, were you aware that you were locking history into film? Did you know back then how iconic these images, and this time period in general, would become?
No, not at all. It didn’t occur to me for one second. Because I loved my camera, I would photograph anybody that I met and anybody that came into my life. So I was photographing all the time. I had no idea that I was photographing and that one day they would be seen by a lot of people or indeed that they would ever be seen again. I just enjoyed taking photographs. It became a passion.

What’s it like revisiting and reliving the past through your images and your autobiography “Wonderful Tonight”?
At first it was quite daunting to go back and look at photographs. They are very emotional. It took me some time before I could feel comfortable with exhibiting them, because of course they take you back to the past and everything that happened in those days; those heavy days or those unhappy days, it all comes flooding back. It was the same with writing the book; you have to face all of those memories.

What convinced you that these photographs were worth exhibiting?
I noticed that online there was an awful lot of information about everyone and a lot of information about me that I had no idea was being made public. An awful lot of it was untrue, although some was true. I realized that people were just digging into other people’s past lives; it made me feel a little bit more comfortable about and exhibiting my past because it seemed like an acceptable thing to do. Previously I would imagine that it would be quite an indulgence to go into your past.

You’ve mentioned before feeling as if you were an “appendage” of someone else—George Harrison or Eric Clapton. For so long, your identity was constantly attached to them. How did you find yourself and your own creative forces?
I didn’t realize that I had this creative force in me until after my divorce from Eric, because then I was completely and utterly at a loss of what to do with my life. I was just confused about what area to go to, and I was so blinded by the confusion that I couldn’t see what was right in front of me, which was my little camera.

You’ve also mentioned that celebrities differ from ordinary people because of their palpable confidence and energy. How did you build this confidence?
With time, definitely with time. Having my very first exhibition gave me a strength and an energy to then write my book. That was a major step for me as a shy person, and having to constantly talk about it in interviews. The first interview I was so nervous about, but it was just a big hurdle in life. I think the more hurdles that one can overcome, and you have to really grit your teeth and go for it, the next time it comes marginally easier. Same with anything. There are times you don’t really want to duke, you’re not sure if it’s going to show you up, or you’re not feeling strong or sure enough about something, but you just got to do it. Just jump in and do it.

What do you hope to convey through your images?
I think my photographs show a delicacy and a softness in the people I’ve taken. I think they’re quite gentle photographs.

Is there a photograph you’ve taken that’s your favorite in some way?
Yes, it’s a photograph of George. He’s leaning back on a bed, and we had just been meditating in India for three months with the Maharishi, and then he and I went down to south India to relax before going to London, where he would get really busy with the Beatles and their new creation, which was Apple. And he’s lying back, and he just looks so calm and peaceful. I think that was really the last time he was so calm and peaceful. After that they all had to work at being businessmen as well as being creative people.

Is there someone, something, or some place that you dream of photographing?
I love travel photography. I really enjoy traveling around the world. I love photographing native people of their country. And I adore doing landscapes.

Where do you draw daily inspiration from?
This always depends because it constantly changes. I might see something, or I might just get a flash of something, or a flash of an idea, and I don’t always know where it came from. It could occur by seeing someone crossing the street, or a car whizzing by, or the reflection on a mirror or a window, or just lighting on something. I love reflection. These are all inspirations. Inspiration comes from nature, really, and realizing it and seizing it.

What do you hope people take away from this exhibition?
I just hope that they really enjoy the photographs. I was so amazed and delighted when I discovered these new images to add to the collection. I am thrilled that Morrison Hotel Gallery has invited me to have an exhibition at the Sunset Marquis.

Do you have any future plans project-wise?
Well, I also paint. I do botanical art. I would like to do photographs like botanical art. I would photograph the finest parts of a flower or a plant and then blow them up really large. I would love to do that. I also did somebody’s album cover the other day! A vinyl album, for this guy named Stephen Dale Petit. He gave me a copy of the album and it’s red. It’s fabulous!