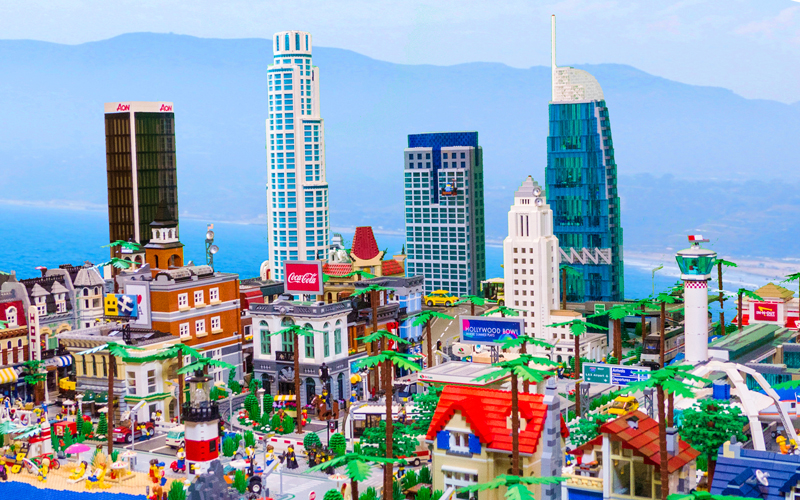 If you were ever a kid (you probably were), and if you ever played with Legos (you probably did), you might want to sit down because your mind is about to be blown. There’s a Lego version of Los Angeles out there that will make everything nine-year-old you ever built look like child’s play (which, to be fair, it was).

This is Jorge Parra Jr. He’s 23. He works nights. In his free time, he builds a Lego city inspired by L.A., where he lives. He’s been slowly constructing it and uploading videos of his progress to Youtube for the past eight years.

It’s not that he’s particularly unique. There’s large and avid community of adult fans of Lego out there obsessively building cities of similar scale. Parra’s version is incredible, though, in how exquisitely it emulates Los Angeles.

For one thing, his cohesive cityscape is packed with local details—a billboard advertising the Hollywood Bowl, a mariachi band, a film shoot, a functioning Metro train, and a police chase. And then there’s his LAX theme building and his city hall—which, if you held a photo of the real thing up next to it, there is absolutely no way you’d be able to tell the difference.

At the center of it all are Parra’s masterfully well-proportioned skyscrapers. He’s got the Aon Center, the Gas Company Tower, the U.S. Bank Tower (its tiered, curved sides are perfect), and the Wilshire Grand. Most importantly, though, (because how could this be an actual representation of Los Angeles without it) he built an In-N-Out. But enough with the words (to quote literally everyone’s freshman year English teacher, “Show don’t tell”), you need to witness this for yourself. Full screen. 1080p. Go.

You Can Unlock $10,000 Worth of Cryptocurrency at This Art Exhibition

Everything We Know About the “Lego”-Themed Pop-Up Bar Coming to L.A.