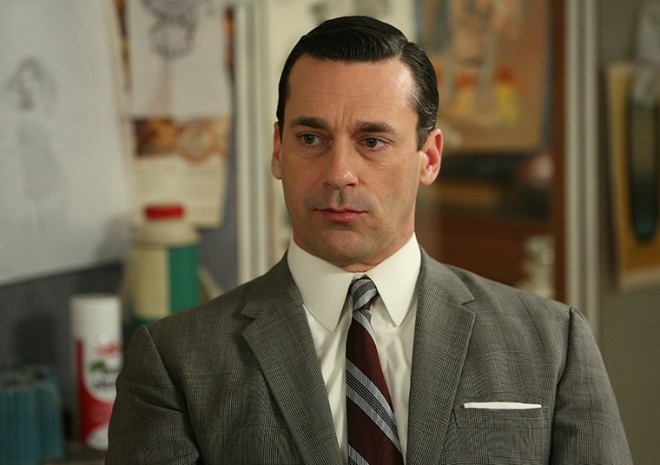 She needs him, and nothing else will do.

After vacating last episode to enable a brief Don-Megan rekindling (Linda Cardellini, how we missed you!), Sylvia Rosen stormed back into Don’s life this week via a one-sided screaming match with her husband, all handily directed by John Slattery. While the pair’s sado-masochistic assignation flirts with 50 Shades of Grey territory, it’s only one half of a double Don Draper power play: at the office, our favorite ad man is busy hazing Ted, who’s determined to kick off the merger with his former rival on his own terms. Only trouble is, this man with a plan is routed in both spheres as the world falls to pieces around him.

Serial infidelity has made it clear that among Don’s many aphrodisiacs, power ranks highly. Wall-thumping conjugal flings aside, Don has felt increasingly isolated by Megan’s burgeoning career and freewheeling independence. Sylvia’s purred plea reactivates Don’s sexual search-and-destroy mechanism. In a season that has increasingly (and hamfistedly) literalized his view of women as whores, the ensuing hotel room sequence comes as no surprise. Don dispenses with any pretense at playful mutuality, opting instead for ironclad control verging on humiliation. He may not be able to stop his wife from kissing another man, but he can order his mistress onto her hands and knees.

What is delicious and shocking, after the escalating indignities, is Sylvia’s game-changing reversal. Initial bewilderment and irritation give way to game submission, but just as suddenly, it’s over. In that moment, the Lothario who with a straight face delivers lines like “You exist in this room for my pleasure” and “Who told you you were allowed to think?” suddenly shrivels into a sad, empty shell of a human being. For the first time since Rachel Menken—the last mistress to truly understand Don although Faye came awfully close—a lover turns him down. Instead of doing the leaving, he’s the one getting left. When Don tries to guilt her into staying, the woman who loaned him Dante again reveals her laser-like clarity by doubling his words back on him: “It’s easy to give up something when you’re ashamed,” she counsels. (Trust a Catholic to see through the faux martyr act.) Don begs but it’s no use. By the time Megan weeps at the television coverage of Bobby Kennedy’s assassination, they’re sitting at right angles, with Don even more isolated than before.

(Incidentally, we didn’t know what to make during these scenes of the camera’s dogged, crazy-making shots (three!) of the hotel room door number: 503. An oblique reference to a passage in the Inferno? A harbinger of some future site-specific tragedy? Google searches of the Sherry-Netherland reveal no major historical significance. If there is a clue or secret symbolism here, this one rivals Bobby Draper’s wallpaper for obscurity.)

Back at the ranch, Ted Chaough heralds a new breed of boss and a shifting office culture: He uses words like “groovy,” holds free association rap sessions, and thinks it’s disrespectful to stroll in forty minutes late for a meeting. Moreover, he’s a dreamboat, traditional Draper territory. This gallant gives up his seat to an underling (and that pilot’s license is a surefire swoon inducer). In the historical spectrum of appropriate workplace decorum, Ted signals an incremental step toward a more egalitarian, functional office culture, one for which Don has little patience or aptitude. Next to his fresh-faced colleague, Don looks increasingly behind the times.

Don mediates the conflict by maneuvering his frenemy onto home turf, a move disguised as an olive branch: mid-morning cocktails and a genius-proving, mystical brainstorm session. Last episode Don joked about ending psychological warfare, but he proves adept here. It’s not even clear he’s undermining Ted until a harried Peggy shows up in his office with that “stop picking on my boyfriend” glint in her eye (and we loved her presumption at suggesting the entire merger was engineered to drag her back to Sterling Cooper). Even Chaough is beside himself with an inferiority complex until a bed-ridden Frank Gleason reminds him who he is: the guy who owns half the company. By the time they pierce the cloud cover, it’s Ted in the aviator shades waxing philosophical while Don tries not to lose his stomach. Megan compared Don to Superman last week, but it’s Ted who actually soars above the clouds.