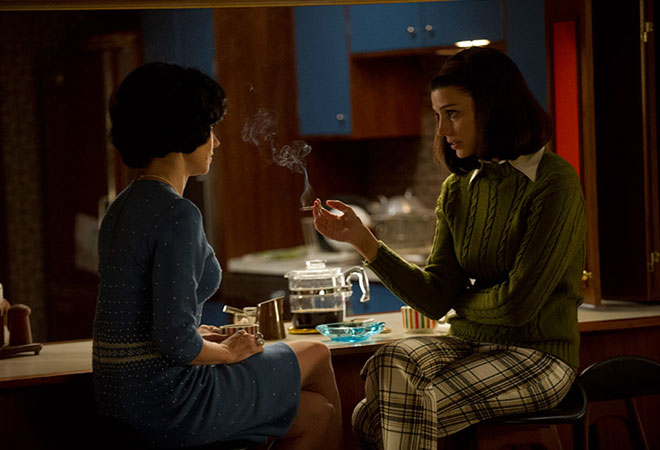 “We just keep saying yes,” Don warns darkly in one of the final scenes of “The Collaborators,” “because we didn’t say no to begin with.”

Sunday’s episode (directed by Jon Hamm!) featured characters pushing and pulling, asserting and violating boundaries, encounters framed in the language of war and conflict. In mirror plots, Don and Pete’s lack of discretion in pursuing affairs with neighbor ladies prompted a string of awkward third-wheel encounters between the clandestine lovers and their bamboozled spouses. Megan privately denies wanting a family, then delivers a different message to Don. Heinz and Jaguar push back in the boardroom when they feel their needs aren’t being met. Joan bristles when the Jaguar scuzzbag shows up in her office before kicking him out, and Peggy refuses to use Stan’s inside scoop to get the jump on Heinz. And then there was Trudy’s spectacular roundhouse kick, drawing her 50-mile radius in the sand with Pete’s blood. The episode itself was set on January 31, 1968, the day when the Vietcong briefly occupied the American embassy as part of the Tet Offensive before getting rebuffed by U.S. forces.

Mad Men has always used politics as a backdrop for the characters’ personal lives, but with the Vietnam War raging (My Lai lies only a couple months off), the connections have become more explicit. Throughout this episode, the male characters used the imagery of combat: Roger praises Don for “the best self-immolation I’ve seen” after the Jaguar pitch, then bungles a quote from Churchill. Ted Chaough declares, “This is how wars are won” as he tries to goad Peggy into pursuing Heinz. And Dr. Rosen gives Don the Cliff Notes on “the two piss-ant countries handing our head to us” over dinner, all too presciently summarizing his own cuckolding: “We give them peace on their sacred holiday, the next thing we know they cut us to ribbons.” As American forces in Vietnam get drawn deeper and deeper into a conflict they neither want nor understand, the characters suffer because of their inability to recognize a quagmire and walk away.

Case in point: Megan’s remarkable transformation in this episode. From her pallid, makeup-free face to the dowdy quilted housecoat, it’s like costume designer Janie Bryant is channeling Betty from season three—and Megan doesn’t (yet) know about Don’s affair. Post-miscarriage Megan, wracked with guilt for her gratitude at not having to negotiate an abortion, is a far cry from the tanned, radiant soap star we saw in the season premiere. We already know where this is going—though if we know Mad Men, it won’t.

Pete, who stepped up last season to fill the quiet suburban desperation role vacated by Don, sealed his fate when Trudy uncovered his affair with a mistress unschooled in subterfuge (witness Pete at his bachelor pad nixing her ideas for extracurricular contact). Consider that the end of Pete’s marriage as a plot device didn’t wasn’t withheld until late in the season to build some dramatic capital: Failed marriages have become old hat. What’s worth noting is the show’s first illustration of domestic abuse (we won’t count Don and Betty’s shoving match in season three), and how much Trudy’s style of confrontation differs from Betty’s. Like Don, Pete denies everything, but Trudy won’t be cowed by attempts to play on her self-doubt. “I can live with that,” she declares.

(Peggy is better off than Pete—in the Don Draper collectible doll lineup, she lucked out with “Awesome at Work” Don—but it’s Bob Benson we need to worry about. His wide-eyed encounter with Pete proves he’s ripe for the same seduction via advertising that corrupted Don. He may not have grown up on a farm, but his desire to bypass his family’s third-generation fidelity to finance looks to prove just as dire.)

As for Don, this episode provided the missing link between the rural childhood we’ve seen in previous flashbacks and his offhand comment to the madame last season that he grew up in a brothel. Our reacquaintance with Dick Whitman appears to pick up shortly after his biological father was killed getting kicked in the face by a horse (the child actor was considerably shorter then, but no matter). His adoptive mother Abigail (Brynn Horrocks) is pregnant, dropping Dick off at the local cathouse to help out her sister and her cocksure boyfriend Mac, presumably because Abigail can’t care for him. “Find your own sins. Stay away from Mac’s,” advises the doll-faced prostitute, but when young Dick spies Abigail and Mac cheating on Ernestine, it’s a not terribly surprising plot thread, especially when Don tosses a wad of cash at Sylvia (Linda Cardellini). For the first time we glimpse the father figure who might have accelerated Dick’s transformation into Don.

We like to think that Sylvia is who Linda Cardellini might have become if Freaks and Geeks‘ Lindsay Weir drove off on that Grateful Dead tour and never looked back. She’s a kinky rebel, but she has the unmistakable whiff of the good girl about her, and in this episode, a serious helping of Catholic guilt—not to mention her own Don Draper template for hypocrisy. She’s a dutiful Catholic, sure, with a conscience so scrupulous she feels guilty about watching daytime soaps. She’s scandalized Megan would consider an abortion, but that doesn’t stop her from boffing the guy upstairs. (And the way Dr. Rosen alludes to sending her kid money, we suspect she might have an illegitimate son squirreled away somewhere.) She sets some feeble parameters: She’ll only screw Don in her maid’s room, not her marriage bed, and she reprimands him for showing up at her door when her husband is home. But as Don astutely notes, she gets off on the naughtiness, and ultimately she caves. “We can’t fall in love,” she gasps in flagrante with Don, echoing his spiel at the restaurant—their fling is about the sex, and nothing more.

Don’s always been good at maintaining his boundaries, and his brilliant underhanded pitch to the Jaguar execs proves it. But he’s miserable at respecting those of others. With Megan suddenly reversing her career girl mentality and opening the door to a pregnancy—and Don’s infidelities nowhere close to fading—we’re betting the Draper household starts to look a lot more like Saigon.