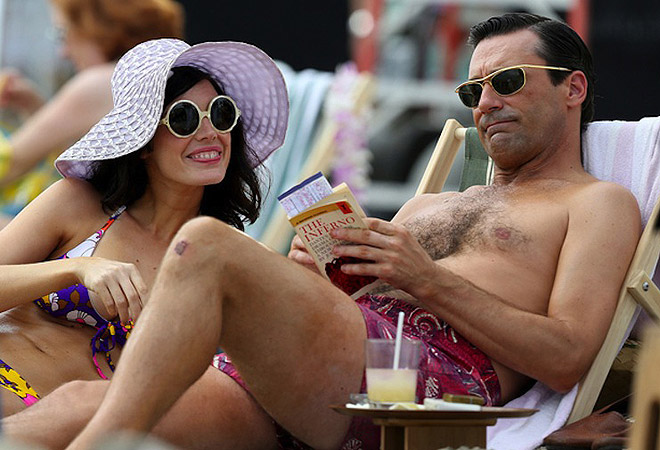 AMC’s Emmy-sweeping series has long been lauded as brilliant and groundbreaking, but in its sixth season, which kicked off on Sunday, Draper and the Gang are following in the white sand-y footsteps of a longstanding, tried-and-true TV tradition: the special “Hawaii” episode.

From the Brady Bunch to Full House, deploying the paradise plotline helps freshen up a series faster than Magnum’s red Ferrari.  (Magnum, of course,  was a resident of Hawaii, so that show, like Hawaii 5-0 doesn’t count.) In the honor of this tiki-loving trope, here’s a roundup of some of our favorite TV trips to the Big Island and beyond. Sorry Draper, but the most powerful Don around here is Ho.

The gold standard of Hawaii-situated scenery, the Brady Bunch managed to extend their stay for three memorable episodes. Let’s hope no one stumbles upon a taboo that will curse the series’ final season.

In this ep, George and Weezy move on up to a deluxe beach chair in the sand. (American Apparel has nothing on these two sweet ‘70s bathing suits.)

It’s 1970s synergy: the Hawaii 5-0 cast and the L.A. junkman team up to solve a heist. Two minutes into this clip, Sanford (and son, natch) are at the royal Hawaiian.

Charlie (and the show’s producers) would find any opportunity to get the Angels into bikinis. The touch of class in this clip is the ukulele version of the theme song.

Leslie Jordan Dishes on His Drug Years, Getting Shot with a Crossbow, and the One Person He Hated Working With