Home Uncategorized Julia Holter Is Not A Cellist—But That Won’t Stop Her From Playing... 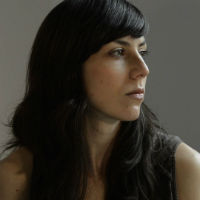 “I’ve been trying to delete the multi-instrumentalist label,” says 29-year-old L.A. composer Julia Holter about her poorly researched Wikipedia entry. “I played cello on my early recordings, but that doesn’t mean I’m a cellist, you know?”

The classically-trained pianist and composer may be too modest about her abilities. Holter has been a figure on the experimental pop scene for several years, wowing audiences and critics alike with expansive soundscapes that vacillate between intimate vocal-driven songs and grand electronic ballroom waltzes. Her two previous albums, Tragedy and Ekstasis, were primarily written and recorded in her makeshift bedroom studio. Her latest album, 2013’s Loud City Song, departs from this do-it-yourself aesthetic for a state-of-the-art studio equipped with session musicians. Loud City Song has been lavished with praise and was named best album of 2013 by The Wire. Here are seven things to know before diving into Julia Holter’s musical pool.

❶ Born in Milwaukee, Holter’s family relocated to Hancock Park when she was six years old. “I started classical piano when I was eight, but I wasn’t a virtuoso,” she says. “I just really liked it.”

❷ The desire to compose rather than specialize in one instrument came when Holter began attending Alexander Hamilton High School on S. Robertson Blvd. “That’s where I started taking myself seriously as a musician,” says Holter. “I’ve never thought of myself as a performer—I never did musicals or anything like that—but I realized at Hamilton that I loved composing.”

❸ Holter’s first composition was written for her CalArts application. “I wrote a piece for cello and this romantic song using a text by William Blake,” she says. “I was very self-conscious about it, not sure it was going to be any good, but it was all I wanted to do.” It must have been pretty good: today, she holds a degree from CalArts.

❹ Unlike Loud City Song, Holter’s previous albums—2011’s Tragedy and 2012’s Ekstasis—were written and recorded almost entirely by Holter. “It’s nice to work with people who know how to mic drums right and how to record properly,” she says about the transition to a professional studio. “But there’s something to be said for doing it yourself. I like working intuitively with it. I don’t really want to be a recording expert.”

❺ Tragedy, Holter’s debut, was modeled thematically on the Greek play Hippolytus. “I didn’t do it because I wanted to show that I can reference a Greek tragedy,” Holter explains. “I was reading it and it just struck me that I could write songs based on these ideas. That’s really how my writing process works. It just happens.”

❻ The universe of Loud City Song is inspired by the classic 1958 movie musical Gigi, based on the novella by French author Colette. “I grew up watching Gigi. My grandmother had it and I watched it there. It’s easy to work with because the themes are so universal,” says Holter. “It felt natural. I wrote a song inspired by a scene in Gigi for a different project but it just didn’t fit in. It was too expansive, so I decided to do a whole album around it.”

❼ “I always identify with the character whose point of view I’m writing from,” she says when asked about writing a concept album. As with every other step of Holter’s writing process, characterization is an intuitive impulse. “I like the feeling of picking over a character. Someone once asked me if that means I have a persona when I perform, but I don’t. I don’t put on a costume or anything. The music just kind of takes you there.”