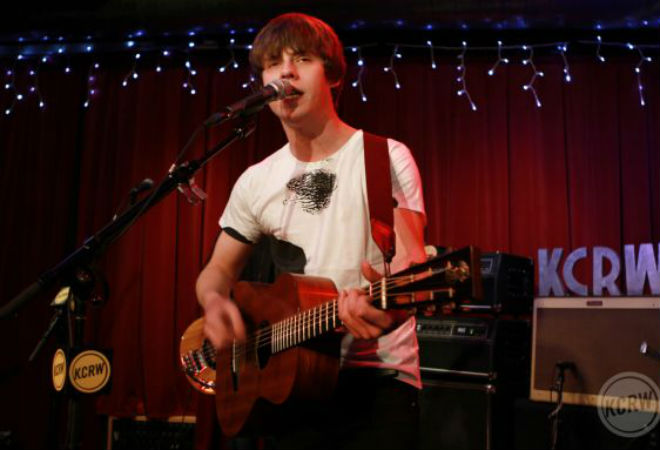 He’s only 19 years old but British singer-songwriter Jake Bugg has already been compared to Dylan, Oasis and the Everly Brothers. (We were impressed when we caught his sets at both the SXSW and Austin City Limits music festivals.) With the recent release of his second album, Shangri La, recorded with Rick Rubin right here in Malibu, he’s showing off an even fuller sound. On Sunday night, Bugg played an intimate set at Apogee Studios, the private recording studio of producer/mixer Bob Clearmountain. Hosted by KCRW, the show was recorded and will air on KCRW’s Morning Becomes Eclectic on December 23.

Bugg kicked off his Sunday set with the high energy rockabilly beats of “There’s a Beast and We all Feed It” from his new album followed by “Trouble Town” from the first. Playing an acoustic guitar and backed by bass and drums, he continued with the soaring “Seen it All” and the hit “Two Fingers,” rounding it out with the jangling guitar rock of new tune “Messed Up Kids.”

He then took a break and answered a few questions from KCRW music director and Morning Becomes Eclectic host Jason Bentley. The last year-and-a-half has been a whirlwind for Bugg but he seems to be taking it in stride. He displayed a quiet ease and sense of humor that makes him seem older than his years. Asked if he’s a celeb in the UK, Bugg admits he prefers to lurk in the shadows. As for performing, life’s not very different: writing songs and playing guitar is all he’s known since he picked up a guitar his uncle gave him when he was 12. It’s the number of people listening that has changed.

Bugg talked about recording with Rick Rubin in Malibu (he liked being somewhere warm)—how great it was to be around pros who taught him how the simplest change can improve a song. Bentley also asked if he had any regrets about using “Lightning Bolt” in a Gatorade commercial. Bugg shrugged it off. He’s hoping if someone hears it down the line, they might remember they had heard it before. He just hopes the song stands up on its own.

After the interview, Bugg returned to play acoustic versions of the gorgeous and plaintive “A Song About Love” and the equally beautiful “Broken” on his own. The band rejoined him and Bugg traded in his acoustic guitar for a Telecaster, exploding into a full-on Keith Richards riff to start “Kingpin,” then playing crazy-great solos on “Taste It” and “Slumville Sunrise.” His punk side shines on “What Doesn’t Kill You” and he wrapped up the set with his hit “Lightning Bolt.

There’s no genre Bugg can’t handle. He’s a strong guitar player and he hits every note like a pro. Whether he’s playing a rockabilly tune, a Keith Richards riff, a beautiful ballad or a wordy punk song, the common threads are his soaring melodies and memorable hooks. And his talent.