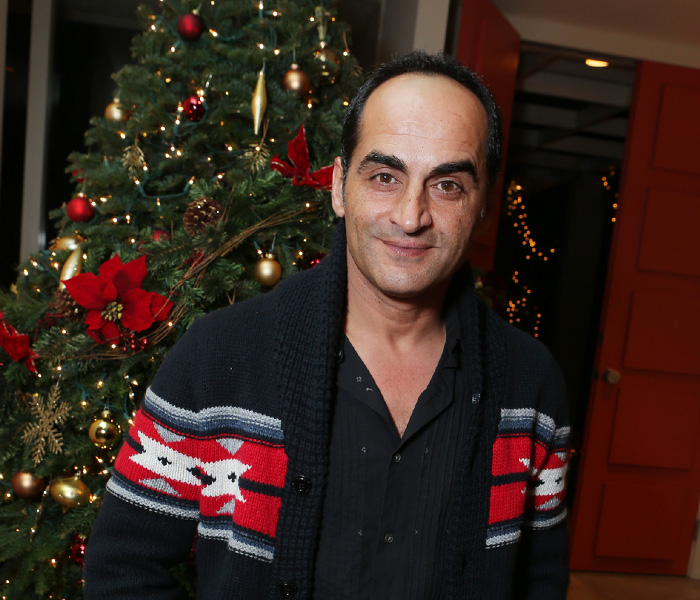 A scary thing happened at Showtime’s Holiday soiree up in the hills. After bingeing on turkey, I was enjoying a cup of hot cocoa (topped with little marshmallows, of course) when I spotted a good-looking gent by the pool. We made eye contact. I smiled, he smiled and we both nodded cordially to one another. Why did he look so familiar? I took a sip and then wiped the marshmallow fluff off the end of my nose. Sweet, fancy, moses. I got the goose bumps—and it wasn’t from the fake snow that was being pumped in from the trees.

I was face to face with Abu Nazir.

There was the terrorist leader who turned Sergeant Nicholas Brody into a would-be suicide bomber—the one the CIA was looking for—right there by the pool. And he was wearing … a Christmas sweater? If you watch Showtime’s Homeland, you know what I’m talking about. If you don’t, you should (boatloads of Emmys) because Navid Negahban (24, Lost) is superbly spooky in his role as terrorist mastermind Abu Nazir. Everyone at the to-do kept coming up to him and patting him on the back and someone hollered to no one in particular, “Nicest guy … ever!” Carrie, Brody, and Saul (Claire Danes, Damian Lewis and Mandy Patinkin) were no shows but Brody’s wife Jessica (Morena Baccarin) did show up for a mingle.

I look forward to Showtime’s party each year. It reminds me of (let’s get into the way back machine) the end of the 1985 movie Rustler’s Rhapsody (a parody of Westerns starring Tom Berenger and Sela Ward). At the end of the flick all the cowboys get together for a bbq, even the ones who have been shot and killed during the course of the movie. Like Rhapsody, most of the actors from each Showtime program are usually in attendance at their Holiday party, even the ones who have met their demise on their respective shows. So you find yourself eating bread pudding with Isaak (Ray Stevenson), who dramatically bled to death aboard Dexter’s boat this season. Also in attendance: Oliver Stone, William Macy, and Michael C. Hall. Thanks for the invite Showtime. Two more episodes of Homeland before the season ends. Now I just need to hang up and call the CIA and inform them that Nazir was last spotted at a home in Beverly Hills drinking cider.