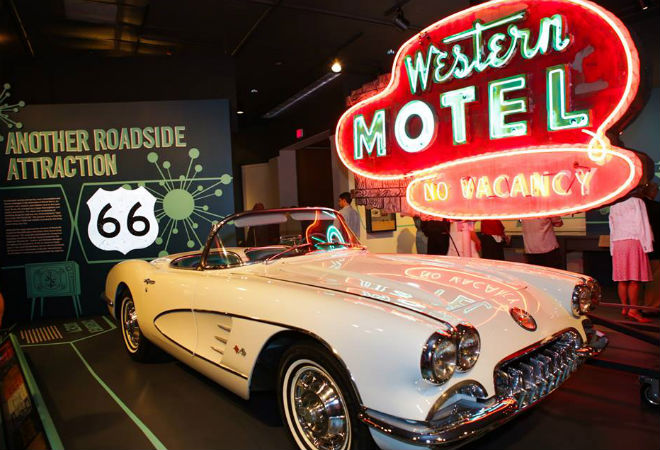 More a notion than a road, Route 66 has remained in the public’s consciousness decades after its novelty and usefulness wore out. The Autry National Center of the American West in Griffith Park explores how “Mother Road” became so iconic in their expansive new exhibit “Route 66: The Road and the Romance.”

Running until January, “Route 66” starts way back in the late 19th-century when many of the country’s roads were unpaved. It wasn’t until November 1926 when Route 66 opened to the public, connecting the boom cities of Chicago and Los Angeles with a route that traversed Missouri, Kansas, Oklahoma, Texas, New Mexico, and Arizona, and fed economies throughout its 2,400 miles. Initially called the Will Rogers Highway, Route 66 was commonly dubbed the “Main Street of America” and “Mother Road” and seen as a shortcut to the West, even though it took weeks to cover.

The futuristic view of Route 66 changed when the Great Depression and Dust Bowl enveloped the nation, turning the highway from a vacation route to an escape passage as millions searched for jobs and homes. The Autry’s exhibit features iconic photos by Dorothea Lange, Arthur Rothstein, and Horace Bristol that depict the hardscrabble life and shifting fortunes of the West that Route 66 suddenly represented. Folk musician Woody Guthrie, who traveled with migrant workers fleeing Oklahoma for California, often provided the soundtrack to this time—Guthrie ephemera, including his “Dust Bowl Ballads,” are on display in “Route 66.”

As the New Deal pumped money into the road and nearby buildings, bridges, and parks, Route 66 began to get its mojo back. With its drive-thrus, billboards, and cheap motels, it epitomized car-crazy post-war America. Nat King Cole’s “(Get Your Kicks On) Route 66” cemented the road’s legend, as did covers by Chuck Berry, the Rolling Stones, and, later, Depeche Mode. The early ’60 show Route 66 ran for four seasons, depicting the adventures of two men as they drive back-and-forth across the country. The family-friendly CBS program reflected a modicum of the restlessness and adventure that Jack Kerouac captured in his classic On the Road, which includes Route 66. Kerouac’s 120-foot-long, single-spaced typed scroll is a highlight of the Autry exhibit.

The decline of Route 66 is explored in the exhibit’s “End of the Trail” section, which describes the toll the Interstate Highway System, the burgeoning airline industry, and even Disneyland and Las Vegas took on the highway. As magical as Route 66 was, it was no longer practical for anyone moving across the West; it was removed from the U.S. Highway System in 1985. In the preservation-minded ’90s, parts of it were designated as a “National Scenic Byway” or “Historic Route 66.” Here in L.A., you can follow Route 66 through bustling Santa Monica Boulevard and see a monument at the terminus, steps from the Pacific Ocean.