Home Music Hecho in El Lay: How Akwid Raps for a Changing City 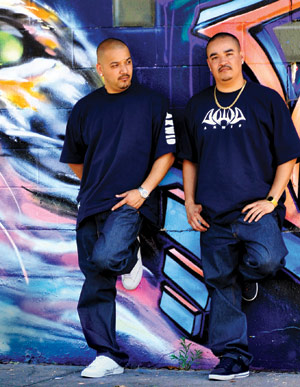 When Sergio and Francisco Gómez were teenagers in South Los Angeles in the early 1990s, they lived across the street from a drug house. Watching the dealers from the windows of the small apartment they shared with their factory worker mother, they received a firsthand lesson in the finer points of the rock cocaine trade. But the drugs never interested the two brothers, who came to L.A. from Michoacán, Mexico, as young kids in the late ’70s. They were more drawn to the music booming from the car that seemed permanently parked in front of the house.

“They would bump hip-hop all night long,” says Francisco. “They always had their windows rolled down so the whole block could hear it. That’s when we first heard rappers like Toddy Tee and King Tee. It became the model of how music should be for us. We wanted to sound like those guys.”

These days Sergio, who is 36, lives in Moreno Valley; Francisco, two years his junior, lives in Diamond Bar. But on this sun-soaked afternoon they’re back on their childhood turf, hanging out on the shady grounds of the L.A. Coliseum. It’s where they come to reconnect with their South L.A. past. When things would get too hectic at home, they’d escape to this spot on their bicycles and skateboards, occasionally ducking into the California Science Center. “This is a neutral zone for all the chaos around here,” says Francisco, who sports the same look—shaved head, pencil-thin mustache, and chin-strap goatee—as his brother. “It’s where we always felt safe. We’ve lived west of here and east of here, so this place holds it all together. It’s our center.”

Since 2003, the Gómez brothers have been rapping about their history as the hip-hop duo Akwid. Over the course of seven albums—two have gone platinum, three have gone gold, and four garnered Grammy nods—they’ve mixed the African American music they heard on the streets (hip-hop, funk, R&B) with the Mexican music they heard at home to create a distinctly local sound: laid-back West Coast rap layered on top of the Mexican brass band music known as banda. It’s a combination that speaks to the cross-cultural, binational realities of the millions of immigrant and first-generation Mexicans growing up in Los Angeles.

Their latest album, Clasificado R, may tackle some familiar Akwid themes—street drama, broken hearts—but at the core of its lyrics, sung mostly in Spanish, is the paisa. A slang term for paisano, or “countryman,” the word refers to working-class immigrants from Mexico. “I’m a paisa from Michoacán, and I’m proud of that,” they rap on the album’s centerpiece, “Esto es pa’ mis paisas” (“This Is for My Paisas”). “These clothes I’m wearing? I got them at the swap meet. That’s my culture, and I’ll never deny my roots.”

The brothers based “Paisas” on a song about Mexican Americans that had nothing to do with paisas: Chicano rapper Frost’s influential 1990 brown-pride anthem “La raza.” Rooted in black hip-hop, “La raza” was itself an adaptation of an earlier black-Latino crossover, “Viva tirado,” the 1970 cruising instrumental by the Mexican American funk-and-soul band El Chicano (a song originally composed by black L.A. jazz veteran Gerald Wilson). “People have been asking to cover my song for a long time, and I’ve always said no,” says Frost, who performs on Akwid’s version. “But their idea made sense, to make it a celebration of a new generation of Mexicans. We’re all the same big pot of menudo, and every now and then you need to add some new flavor.”

Akwid gave the song an updated map, moving its focus from East L.A., the city’s longtime capital of Mexican American life, to what have become the immigrant hubs of South L.A., Bell, and South Gate. “This paisa culture has been doing its thing for a long time but hasn’t been given a position to really say ‘This is who we are, and we are proud of it,’?” says Sergio. “That’s why Frost was OK with us changing up his song. We are not diminishing Chicanos. We’re just talking about it from the other side—the way L.A. looks through the eyes of a paisa.”

When the Gómez brothers first called South L.A. home in the 1980s, it was still known as “South-Central” and was synonymous with black, not Mexican and Central American, life. They were part of a major demographic shift that fundamentally altered the area. After the exodus fueled by the 1980s Mexican economic crisis and the passage of the 1986 Immigration Reform and Control Act (which provided amnesty for undocumented immigrants), once historically black communities like Watts and Compton became majority Latino.

The changes have produced all-too-familiar stories of black and Mexican conflict: competition over jobs, housing, and education; bitter battles over political representation in city government; and deadly struggles between black and Latino gangs over drug turf. Largely ignored was how, even amid the strife, the cultures were feeding into each other. “Sure, there are cases where you see tensions between black and Latino youth,” says Manuel Pastor, codirector of USC’s Center for the Study of Immigrant Integration. “But what you see most often is the borrowing that goes on between young people. Akwid are a perfect example of that.”

By the time Sergio and Francisco moved to 41st and Wall, they were hard-core fans of Compton hip-hop acts 2nd II None and DJ Quik. Emulating their idols, they started rapping in English and wearing their hair in braids. They called themselves Juvenile Style and played any party that would have them. “We were mimicking a lifestyle that we learned in the streets,” says Sergio. “We were copying what black artists were doing.”

Juvenile Style released two albums—1993’s Time 2 Expand and 1995’s Brewed in South Central—before their label folded. To get by as the band struggled, Sergio started working at McDonald’s and Bob’s Big Boy alongside Mexican migrants, and that’s when he experienced what he describes as an epiphany. “I started to think, Why are all the busboys Mexican?” he says. “Working with other Mexicans really woke me up to what it means to be Mexican in L.A. It woke me up to being paisa. I started to be reintroduced to my own culture.”

This was a time when radio stations playing banda music from the Mexican state of Sinaloa began to rule the L.A. dial, and the quebradita craze—quick-step dancing done to brass band music—swept through Mexican L.A. To look and sound paisa became the ultimate mark of cool. “I remember going to parties and seeing all these Mexican gangsters wearing sombreros,” says Francisco. “They got in their rides and bumped Dr. Dre and Eazy-E, but at the party they were dancing to banda.”

The turning point came in 1992 with the murder of Chalino Sanchez, a beloved Mexican corrido, or ballad, singer from Sinaloa. A onetime Coachella Valley migrant worker-turned-populist icon, Sanchez had a reputation for toughness and truth telling, and his death only made him more popular with young L.A. Mexicans in search of someone to identify with. “After Chalino, you could really start to see the impact of Mexican culture in L.A.,” says Francisco. “It was like suddenly it was OK to be Mexican. You became you. It’s comforting to be able to say ‘I don’t have to be embarrassed to be Mexican anymore.’ When we were kids, we’d get made fun of for speaking Spanish, for being or sounding too Mexican. In the ’90s, that all went away, and it was OK to start embracing it.”

The brothers eventually dissolved Juvenile Style and after a few years working for local technology companies, decided it was time to rethink their music. In 1999, they formed Akwid, a moniker that combines their nicknames, “AK” and “Wikid.” Their first single, “No hay manera” (“There’s No Way”), debuted in 2003, the brothers rapping in Spanish over brassy Mexican horns and snippets of a ’90s hit song from Mexican superstars Banda el Recodo.

“When you are raised around both black and Mexican communities,” says Sergio, “you are able to see both sides and have a wider perspective than if you were raised in just one. You don’t get stuck in one or the other.”

That duality is all over Clasificado R. Slick Rick’s hip-hop classic “Children’s Story” is given a banda makeover as “Por tus pujidos nos hallaron,” and Zapp’s ’80s funk staple “More Bounce to the Ounce” is laced with clarinets and tubas on “Luna llena.” For the album’s musical arrangements Akwid hired Antonio Lopez, a Mexico City banda performer who is based in Fontana and best known for his version of the rapper 50 Cent’s hit “P.I.M.P.”

“They knew I wasn’t the traditional Mexican arranger,” says Lopez. “I’m open to hip-hop. Mixing the two styles together is what L.A. is all about.”

On Clasificado R’s first single, “California,” the Gómez brothers tried to come up with a new anthem for the California—and the L.A.—that they believe too few are talking about. There may be obligatory shots of palm trees and bikini-covered beaches in the video, but the California they envision is built on the dreams of undocumented migrants—the mojados hechiceros, or “sorcerer wetbacks”—who root for the Dodgers and the Lakers.