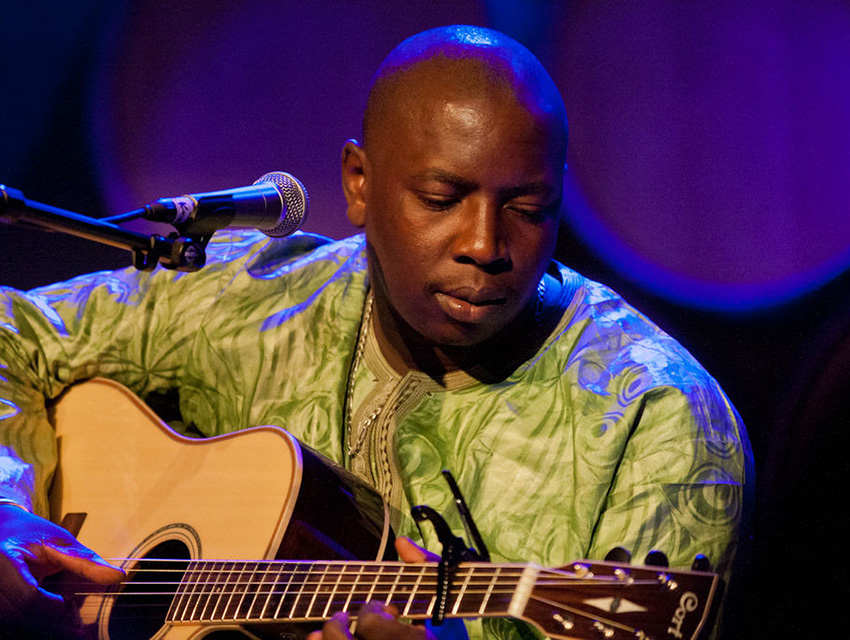 In 2008, a chance meeting in the Berlin airport had major repercussions for the international music community. Vieux Farka Touré, the son of legendary Malian musician Ali Farka Touré and a guitarist in his own right, bumped into Idan Raichel, an Israeli songwriter and pianist. Raichel had previously spent some six or seven years listening nearly every day to “Diaraby” off the elder Touré’s Talking Timbuktu album, and claims the deceased African bluesman among his primary musical influences. The keyboardist admired Vieux’s work—and said he was looking to take a breather from his own band.

Raichel invited the younger Touré to the Middle East, and one evening, at the latter’s suggestion (according to a narrative that is rapidly gelling into music legend) they wedged themselves into a tiny studio and spent three hours in an epic jam session. That improvisational body of work, an interplay of teasing melodies released by the Cumbancha label in 2012, came to be known as The Tel Aviv Session and their collaboration, the Touré-Raichel Collective.

After a hiatus to pursue their solo careers, the pair have reunited for a sophomore effort. The Paris Session was recorded over three days at Studio Malambo just outside the city, this time with additional input from musician friends, including Israeli trumpeter Niv Toar, Malian singer Seckouba Diabate, and Senegalese artist Daby Touré on bass, among others. The Touré-Raichel Collective will debut their new album tonight at the Valley Performing Arts Center in Northridge. Touré, who speaks French, agreed to talk via email about merging their artistic styles and playing in his father’s footsteps.

How has your career been affected since The Tel Aviv Session?
This has been a very nice project for me. I think it was good to show people that there are other things I can do as an artist besides the Malian rock and blues that people know from me. It has been very good for my career, and I think for Idan’s too.

The first album was an organic experiment. What was the process for this album? What about your approach changed?
The only difference was that this time we knew we were recording an album to be released—we weren’t just jamming. But we wanted to keep the same spirit as the first album and create music very spontaneously. So we did not plan anything before the studio—we approached it the same way we did the jam in Tel Aviv.

How did you decide which guests and instruments to include on the album?
We would record a new song and then say, “What would be good to add to this song?” Then maybe we wanted a singer or a ngoni [a West African string instrument] or even a trumpet, and we would just invite friends that we knew could do a great job and would be happy to participate.

You were originally planning to record the album in Bamako but switched to Paris when the political situation in Mali became too unstable. How did it affect the experience to be recording in a place neither of you call home?
For me it was ok, as I know Paris very well and I am comfortable there. Idan too, I think. For me it was a shame we could not record in Mali, so I hope we will do the next project there.

What have you and Idan learned about each other’s musical styles since working together the last couple years?
I think the most important thing we have learned about each other is how we approach music. We have a bit different philosophies about music, but basically we share the same spirit about it. Idan likes to have things a bit more organized and I like to just sit and play without planning things too much. But for this project, Idan was also happy to take this approach. This is what makes the project special. It is like jazz in that sense, whereas what we normally do has more structure.

The Paris Session also includes your father’s song “Diaraby” from his album Talking Timbuktu. Why did you want to include that song? What did it mean to record it with Idan?
It was Idan that had the idea of recording that song, and I said “OK, that could be great, but I do not want to record any guitar for it.” For me it was a sign of respect to my father that I not play the guitar on that song. That is his song to play on the guitar. Maybe he is jamming with us in paradise.