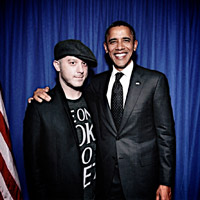 DJ Adam 12 knows how to get a political party started. The Silver Lake-based DJ (and half of the duo She Wants Revenge) has been cuing up the music at Democratic Party fund-raisers and events for the past few years. Set to spin at the Democratic National Convention closing party in Charlotte, North Carolina on September 6, he pre-imagines his Presidential playlist for Culture Files

Delegates are arriving, and they look exhausted from all the other events.

The room is full—but everyone’s more interested in gabbing about that balloon drop than hitting the dance floor.

“This is the time where I’m trying to throw things out to see what sticks and how far I can push the crowd. I can tell if people are into it if they are bobbing their heads. With a song like “Unbelievable” you can get the vibe whether or not people are going to be into something a little more underground or not. If no one’s into it, I know not to go any further than that.”

They are into it. Kal Penn looks ready to bust a move.

“I wish there was a version called ‘Delegates in Paris.’ I’ll play the Ray Charles version first for the old timers. You have to make the old timers happy and keep the young people interested up until that tipping point where the old people have had a few and are ready to sit down or go. I’d give them the original version then go into the Kanye version so everybody’s happy. It’s an easy trick.”

He’ll play: “The Light,” by Common

“It has to be something from Chicago. I may even throw in the original sample, which is a song by Bobby Caldwell.”

The line at the bar is finally thinning out. Meaning, everyone’s been served.

He’ll play: “I Want You Back,” by The Jackson Five

“This is a no brainer, but it’s a no brainer for a reason: It always works. I know what he likes, and the soul stuff always works. Now everyone’s had a couple of drinks, they’re tipsy, and we can get into the big classic soul hits.”

He’ll play: “Don’t Stop til You Get Enough,” by Michael Jackson

“I just want to see her get her groove on to that song, I guess. I think we all do.”

The party is in full swing—and, being from L.A., you want to slip something in from a local band.

“It’s the most representative of Los Angeles. In a night you can always do a little west coast tribute wherever you are in the world, and that song is part of it and could set up the rest of that set. It makes a statement.”

The party is coming to an end and it’s time to wrap things up—but “Don’t Stop Believing” has been played all convention long.

He’ll play: “Everybody Loves the Sunshine,” by Roy Ayers

“It sends people off feeling good, and it also lets people know it’s the last song. It’s slow, pretty, people get the picture. If there are any lovers in the building—it’s the end of the convention, it’s been a long week, they are exhausted and stressed and that guy or girl that they may have been eyeing all week is looking better than they have because everyone’s had a couple of drinks… I’m only providing the soundtrack for the rest of their lives—or maybe the night. That’s why I get paid the big bucks.”