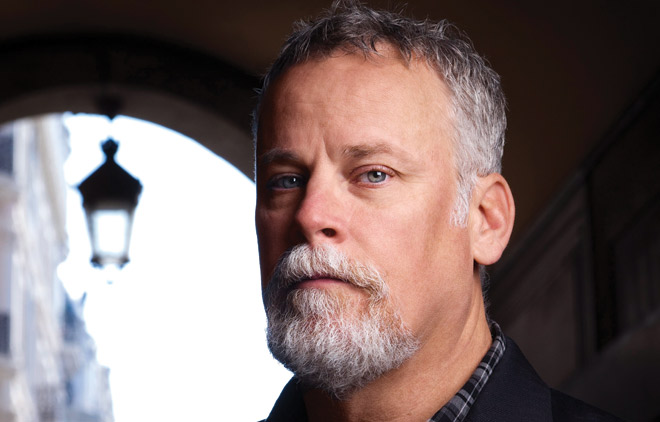 It’s the 18th book for Harry Bosch, his most famous character, and the 25th book for author Michael Connelly. Out November 26, The Black Box debuts on the 20th anniversary of his—and Harry’s—first novel, Black Echo. Connelly, who barely takes notes and mostly writes from memory, draws heavily on his years as a crime reporter at the Los Angeles Times in the early 1990s for this story about the 1992 L.A. riots.

Why this story relating back to the 1992 LA riots? Why now?
I was cognizant of the anniversary of the riots and of my publishing my first book. I wanted to write a book that encompassed the two—there was nothing bigger in LA in ’92 than the riots and I was a newspaper reporter still at the time and the riots stayed with me. Being a former journalist, I knew there would be a lot of discussion about the anniversary, especially in LA. I try at all times with these books to have a little bit of what’s happening, what’s going on in them at the time they are published.

When you originally conceived of the Harry Bosch character, did you ever think you would write 18 books about him?
Gosh no. That would be presumptuous. I remember putting stuff in my first novel, hoping I could write about it more, hoping they would let me write another book at least. I’m still interested in the character, he’s not stale. He’s been in 18 novels and I almost feel I could do another 2 million words about him.

Why did you name him after the 15th century Dutch painter Hieronymous Bosch?
It’s metaphorical. I envisioned this guy as emblematic of the city and the underbelly of the city. This related to Hieronymous Bosch’s painting The Garden of Earthly Delights showing what is going wrong in the garden. Some people will get the reference, others won’t. I came across him in college.

I didn’t foresee getting published in other countries. In Europe, Hieronymous Bosch is as famous as Mickey Mantle. It’s a totally different reaction. Little did I know, Hieronymous is the Latin derivative of Jerome. When I traveled to Holland, where he’s from, they asked me: ‘why did you call him Harry instead of Jerry?’ That would have changed a lot about the guy, being named Jerry not Harry.

What is your writing process like?
It depends on where I am in the series. I need 100,000 words. It’s about momentum, how you get it, how you keep it. I gather characters, situations, pieces of dialogue. It starts very minimalistic, a few hours a day then to however many hours a day, 14 to 16 hours. I average about 10 months to write a book. But I’ve been thinking about them for years. 60 to 70 percent of the book is done in the last three months. For The Lincoln Lawyer, I knew I needed to do a lot of research. Five years later I sat down to write it. I look at it in terms of I wrote it in five years. It was a five-year process to research and write. For this new Harry Bosch book, The Black Box, I wrote it in about eight months, with the idea to connect a 20-year story. In that time period I had to get the experience of that time. I found homicide detectives that worked there during the L.A. riots. I pretty much relied on three detectives—one retired, two still active.

What do you think initially drew you to crime reporting?
I wanted to write crime fiction. I loved reading crime novels. I thought, ‘how did you get to that place?’ My father and I put our heads together when I was 19. He thought I should be a cop, but I didn’t have the temperament for it. So I went into journalism. Using those experiences and writing on deadline—that would be useful someday to write crime fiction. I already had this vague goal. I saw journalism as years of research. I was hanging around in police stations when I had no reason to be there. I saw a lot and put stories in my back pocket for later. A lot of that still informs what I do.