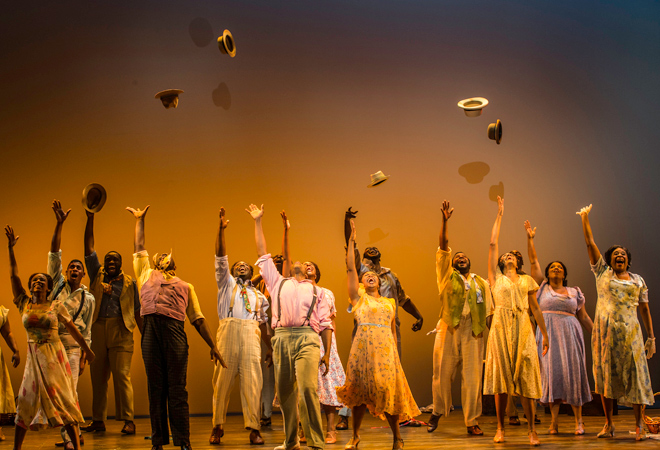 George Gershwin called Porgy and Bess an opera. Yet he chose to debut the work at the Alvin Theatre in New York in October of 1935 because he wanted people who would never get to an opera house to be able to see it. Since then Porgy and Bess has appeared in both opera houses and on theater stages. In August of 2011, director Diane Paulus (Hair, Pippin,) with the help of Pulitzer Prize-winning playwright Suzan-Lori Parks (Topdog/Underdog) embarked on a new production that made significant changes to the book. It opened on Broadway in early 2012 with not just a new book but a new name, The Gershwin’s Porgy and Bess. The show opens next week at the Ahmanson Theatre.

“In my opinion it is an opera,” says Strunsky. “I think in George’s opinion it’s an opera. And Ira always considered it an opera.” Porgy and Bess tells the story of Bess, a woman desperately trying to get out from under her past. Two men do all they can to prevent her from changing her ways, her former lover Crown and another man named Sporting Life who uses charm and drugs to seduce. Only the crippled Porgy, among all the people in Charleston’s Catfish Row, offers any help to Bess.

The production originated in the late-’80s with a production directed by Trevor Nunn (Cats, Les Miserables.) “In 1985, when I was brand new at doing this, we got a call from Trevor who wanted to see my aunt,” explains Strunsky. “He said, ‘I want to take Porgy off his knees. There is a lack of masculinity because he’s on his knees. It’s very hard for the audience to imagine that he and Bess would have a sexual relationship.’ Trevor used his not insubstantial charm and she agreed to it. And when we saw it, it was very obvious that he’d been correct.”

That production was booked at Covent Garden in 1991. The show was taped, but Strunsky thinks it has significant flaws. “If you were to watch it today, you’d see the faults in the lip synch,” Strunsky says. “One night after a really horrendous day of trying to get it right, Trevor and I went to the pub across from Shepperton [Studios.]

Somewhere in that conversation he said, ‘This would make a great musical.’ It went into my head and I never let go of the idea.” Nunn did ultimately stage it in London as a musical in 2006, but the show didn’t succeed. “The trouble was the Brits didn’t really understand the black experience in American. We closed after six months. It didn’t go to New York because it had done really poorly in London.”

Strunsky didn’t give up. “I was looking around and I was introduced to Jeffrey Richards who said ‘Why don’t you see Diane Paulus in Boston.’ She had seen Trevor’s production and the two of us brainstormed what was wrong with it. Diane realized we had to do more to make it into a Broadway musical instead of an opera-lite. She hired Parks, all with the family’s approval.”

Just prior to the out-of-town opening in Boston, composer Stephen Sondheim penned a letter to the New York Times in response to comments made by Paulus and Parks in interview with the paper. “It exists. It was very unfair,” Strunsky says. “They were talking about changes that they thought would make the show more interesting. Some of them were adopted. Some of the things he talked about we felt or Diane felt regardless of what he said. I guess he was right about a few of those things. Maybe Diane and Suzan-Lori’s comments were a bit egotistic. [They] might have been a bit too self-aggrandizing. It still, in my opinion, was a dump on the concept. It was like how dare they adapt to a more Broadway-style piece.”

U.S. copyright laws mean that a work like Porgy and Bess would enter public domain in 2030, 95 years after being published. Does this reworking of the opera serve as an opportunity to create a new work with a longer copyright? “Under American copyright law, all of our plays starting in 1983 with My One and Only are all modifications which form new works. That doesn’t protect the songs within the play. These are all new works: My One and Only, Crazy for You, Porgy and Bess, and Nice Work If You Can Get It. They all have different book writers and that’s what will manage the term of life of these.” New copyright laws allow for the life of the longest surviving author plus 70 years. “I hope that this version of Porgy and Bess as a unique copyrighted work will play for 70 years after the death of Suzan-Lori Parks; she’s 42.”

How does Strunsky think George Gershwin would respond to this new production? “I can’t get inside the head of a man who died in 1937. Here’s this marvelous piece, intellectually and artistically. If we create another piece, we’re not going to lose the opera in any way. We have no shortage of requests from opera houses to continue to do Porgy and Bess the opera.”