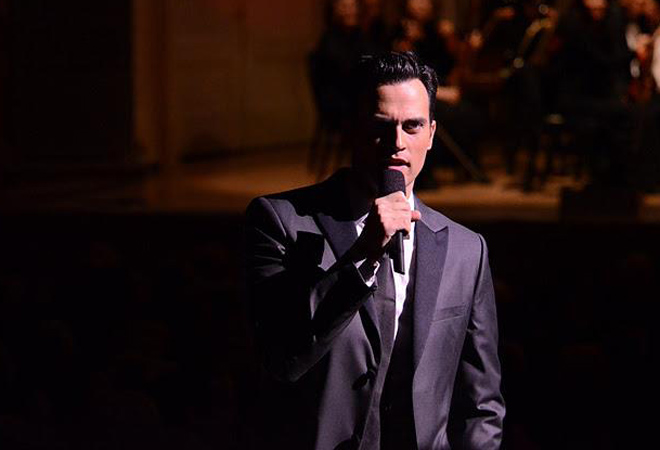 There’s something about the decades well before his birth that keep hovering over Cheyenne Jackson. He first came to fame in All Shook Up, a musical using Elvis Presley’s songs. He later appeared in a revival of Finian’s Rainbow, a show that first appeared on Broadway in the late 1940s. This Saturday he’ll be singing Music of the Mad Men Era in his solo concert debut at Disney Hall.

This throwback approach was the first we thing discussed. “I think it started in high school when my teacher said ‘You were born in the wrong era because your voice was suited for the American songbook of the 1950s,'” Jackson says. “I was obsessed with Chet Baker and that vibe. My dad always had Elvis and Roy Orbison playing.  I just related to it.”

Since Mad Men isn’t a musical, Jackson had to put together the show based on both his own passion for the material and his desire to create a memorable production that reveals more of who he is. “I like to give the audience some of what they want, but I’m a firm believer in giving them what they need—even if they don’t know they need it,” he says. “I don’t like to go to concerts, even if they are really talented people I look up to, if it becomes just a recital. I want to hear from you. I want to get to know you. I keep all these things in mind when I put together a show.”

How much does he reveal about himself in his shows? “It’s difficult for me, because I’m very, very open. Some would say to a fault. It’s gotten me in trouble talking too much about my personal life. I feel like in a show setting, there isn’t really anything that’s off limits. It’s a struggle every day how much to say and how much not to say. Each situation is different.”

In spite of the title, Jackson’s show promises to be eclectic. “I’m doing an Amy Winehouse song, which isn’t of the period but has that vibe,” he says. “‘Angel Eyes,’ I love the melody and the melancholy feel. I’m also doing a song called ‘Red Wine Is Good for My Heart,’ which is something my grandma used to say. It’s a personal song, but it has a Chet Baker/Billie Holiday feel and it’s about pain and longing.”

He’s also performing a song written by his music director, Ben Toth, based on a poem by Sylvia Plath. “Ben is my heterosexual musical life partner,” Jackson exclaims.  “That song, ‘Mad Girl’s Love Song’ that he wrote the music to is, I think, and Michael Feinstein said it first, destined to be something. It’s such a powerful song. It talks about deep sadness and pain and he has married it to this jazzy melody that is infused with…”  Jackson trails off then adds, “Everybody afterwards talks about it.”

After years in New York Jackson now calls Los Angeles home, putting him in close proximity to his parents and siblings. “This is the first time in our adult lives we’ve all lived in the same state as our parents. In getting sober, I want to be near family. The man I fell in love with is here too, which helps. What I’ve done to make it feel like home is get a house, a car, a washer and dryer. I live in a neighborhood. I have neighbors.”

As for the future, Jackson recently finished shooting an HBO pilot, his ninth, he reveals. And there’s the hope of a new show on Broadway. He has yet to originate a role in a completely new musical though he has come close; he was involved with The Book of Mormon and Altar Boyz during the development of those shows. He was also up for The Light in the Piazza, a role that went to Glee star Matthew Morrison. “When people ask me what’s my dream role, it hasn’t been written yet. Xanadu was the closest. Because of my sense of humor and what I look like, all these factor into what I can be cast in. If it doesn’t get written, I’ll have to write it myself.”