Home Uncategorized CicLAvia: Peddling from Downtown to the Sea 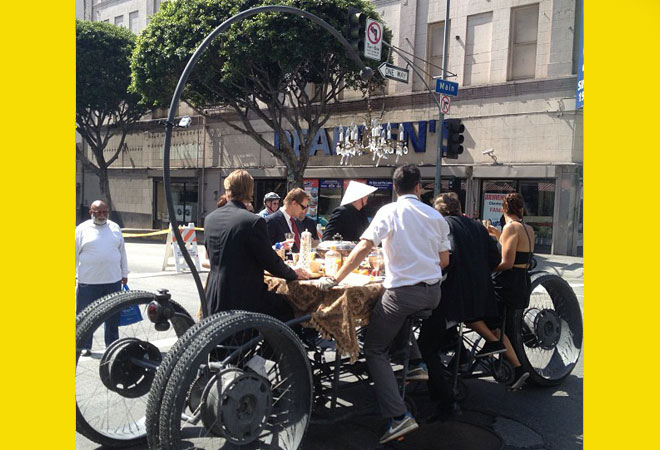 Los Angeles has hosted CicLAvia several times over the past few years, but Sunday’s event marked the largest and longest iteration of the car-free fest. The route for CicLAvia – To The Sea started in downtown near City Hall and stretched along Venice Blvd. all the way to the ocean, a full 15 miles. (By some estimates nearly 150,000 people participated on Sunday.)

There were plenty of dolled up helmets and stylish socks on display but the requirements to participate? Not much. All you need is a bicycle, a scooter, a skateboard, a wheelchair or your own two feet. As long as it isn’t motorized, you can ride it in CicLAvia. While most participants opted for bicycles, a few visionaries chose more elaborate contraptions.

Along with six companions (all dressed in their finery), Daniel Busby of A Moveable Feast, set out on a rolling dining table complete with place settings and a chandelier. With one person up front steering the steampunk-esque contraption, the other diners pedaled for their brunch. That’s one way to earn your mimosa.

The event also highlights the city’s Car Free LA initiative. Spearheaded by the Los Angeles Tourism & Convention Board, it’s an attempt to show off new bike paths and public transit options. Those who want to be a tourist in their own town can take advantage of itineraries designed to help you explore various areas like San Pedro, downtown, Miracle Mile, and Hollywood without a car.

If you want to join the car-free throngs but missed this Sunday’s CicLAvia, you can start gearing up for the next one. On June 23, CicLAvia – Iconic Wilshire Boulevard will roll down Wilshire Blvd. from downtown to Fairfax Ave. in the Miracle Mile neighborhood.